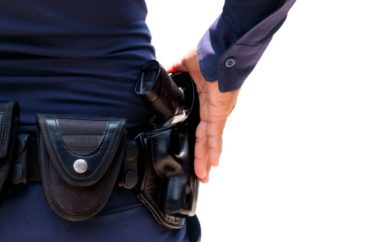 A lawsuit has been filed against Macomb Community College after its campus police tried to stop a group of students from handing out information touting the benefits of fossil fuels.

Three students working to advance their arguments at the Michigan college in late April were threatened with trespassing by the officers because the students did not have official permission from administrators to engage in public expression on campus, alleges the lawsuit, filed last week.

The lawsuit claims the college’s policy requiring a 48-hour pre-approval in person and in writing for expressive activity is a violation of students’ First Amendment rights. The suit also takes issue with the fact that even after such permission is obtained, the speech zone at the community college’s Central Campus is only about .001 percent of the entire 230-acre campus.

The three students, meanwhile, are now afraid to continue similar conversations in fear of being charged with trespassing, the lawsuit states.

The students are members of Turning Point USA, an organization dedicated to promoting the principles of freedom, free markets and limited government. 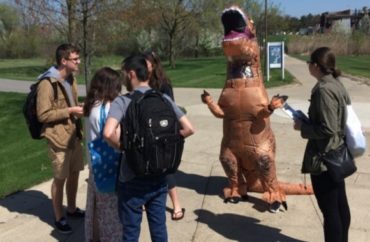 The three students, one of whom donned a T-Rex costume, had been collecting signatures and speaking to passers-by about the benefits of fossil fuels at the time they were confronted by officers, according to Alliance Defending Freedom, which filed the lawsuit July 5 on the students’ behalf.

In a July 7 press release, the college states the students continued their activity even after their warning from campus police. The college also states that their policy does not engage in viewpoint discrimination.

“Macomb Community College is a strong proponent of free speech, with a policy on expressive activity that balances the First Amendment rights of individuals with the safety and security of students and visitors, as well as their ability to access college facilities and traverse college grounds,” the college states.

The policy does not apply to labor unions, allowing union members to engage in expressive activity without a permit.

“Of all places, public colleges are supposed to be budding laboratories for democracy. Administrators should encourage, not stifle, free expression,” said attorney Caleb Dalton in a press release.

The lawsuit calls on the U.S. District Court for the Eastern District of Michigan to declare the college’s policies unconstitutional, “to award nominal damages, and to block officials from further censorship.”

In an email to The College Fix, Turning Point USA spokesman Jake Hoffman stated that the organization is proud of its student leaders “for fighting these kinds of suppressive and discriminatory free speech policies.”