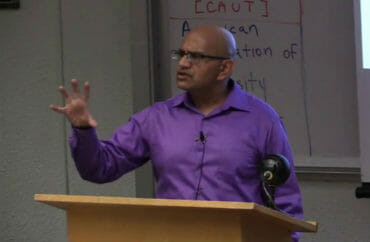 A Canadian professor under investigation for making unpopular comments about multiculturalism and gender issues is finding support from other Canadian academics who have faced similar criticism.

Acadia University in Nova Scotia told Rick Mehta, who teaches psychology, that it had received a barrage of complaints from both campus members and others about his classroom content and social media comments.

“The University has a legal responsibility to provide an environment free from discrimination, sexual harassment and personal harassment,” Vice President Heather Hemming told Mehta in a Feb. 13 letter.

“The nature and frequency of these complaints and the significance of the allegations is concerning for the University, and we have determined the necessity of proceeding to a formal investigation,” Hemming wrote.

She said Acadia is using Wayne MacKay, professor emeritus of law at nearby Dalhousie University, to investigate the case.

An Acadia spokesperson declined to tell The College Fix what policies Mehta allegedly violated and what in his behavior implicated “discrimination, sexual harassment and personal harassment.”

Mehta, who presents himself as a free-speech champion, is sometimes compared to a fellow psychology professor, the University of Toronto’s Jordan Peterson, known for his refusal to use gender-neutral pronouns.

A spokesperson for Peterson told The Fix that he doesn’t have time to comment on Mehta’s situation.

Weeks before Mehta was informed he was under investigation, students and activists were pushing for his termination.

Jessica Durling, a “human rights activist, journalist, and radical sex theorist” who does not appear to have a connection to Acadia, created a Change.org petition that has gained nearly 1,200 signatures as of Sunday night.

“We demand the full removal of Rich Mehta from the university” because he has “expressed he is against trans rights, believes residential schools [for indigenous children] did good, and believes that the Indigenous ‘industry’ are exploiting Western values of justice,” it says.

“All these groups are protected under the Nova Scotia Human Rights Act,” and “marginalized communities … cannot feel comfortable” with Mehta continuing to teach at “a respected university such as Acadia.”

The petition does not include any quotes from Mehta’s speaking or writing that back up its claims about his views. It simply includes a screenshot of Mehta’s retweet of a tweet that says it is “statistically impossible” for all children educated in residential schools to have had a “negative experience.”

One person wrote in the petition comments that Mehta’s supposed views on “trans issues, sexuality issues, gender politics” are dangerous and destructive.

‘If someone has hurt feelings, they have a basis for making a claim’

The Feb. 13 Hemming letter does not directly say which policies Mehta is accused of violating, but Acadia’s Policy Against Harassment and Discrimination cites Nova Scotia’s human rights law for its definitions of discrimination and sexual harassment.

Discrimination “makes a distinction” based on a protected characteristic, “whether intentional or not,” that imposes “burdens, obligations, or disadvantages” on a person. Sexual harassment includes “a course of comment that is known or ought reasonably to be known as unwelcome.”

Acadia itself defines “personal harassment” as “conduct of an abusive nature” that the accused person “should have known was unwelcome” and that that “detrimentally affects” the person who experiences it.

These three violations can be triggered by a single incident or a “series of incidents, which, in isolation,” would not constitute violations. They aren’t limited to on-campus incidents, and they don’t depend on the violator’s intent.

Acadia’s policy “explicitly states that intentions don’t matter” but “all that matters is the outcome,” Mehta told The Fix in an email.

“So if someone is offended or has hurt feelings, they have a basis for making a claim of harassment and/or discrimination,” he said.

Mehta’s “designated department head” told him in a Feb. 26 letter that some students have said they are so “disturbed” by Mehta’s comments that they are “not going to class,” according to the National Post.

Rob Raeside, an Earth and environmental science professor, said students have not provided “precise details of the racist and transphobic comments,” but they said Mehta uses material from “right-leaning fringe websites.”

I fully understand that university teaching should expose students to a range of viewpoints, and especially in a discipline like psychology some of these perspectives may be challenging to students. However, in a first-year class it is imperative that the approach be well-balanced and must be in line with published resources.

On Saturday Mehta posted a screenshot of an email from Raeside, ordering him to remove “audible student comments” from class recordings that Mehta has made available to some Twitter followers. Mehta claimed in a tweet that “no one objected” when he asked the class if he could record.

Below is a screenshot of an email message that I received from Rob Raeside, who is my Designated Head for the purposes of my career development and for disciplining me. In this message, he asks me to remove my public posts of my Intro Psych classes. CC: @jordanbpeterson @GadSaad pic.twitter.com/OtheTJPRUe

Alfred Kinsey did the same thing?

Shepherd, who also faced a university investigation for showing the debate video, told The Fix in an email that sometimes “people make these kinds of claims [of going off-topic in class] simply because they take issue with the content being expressed.”

If Mehta were expressing “more mainstream/politically correct views” rather than his supposed controversial views, Shepherd said, “I wonder if the students would still complain about him ‘ranting’ during class time. In other words, the claims he is going off topic could be a way to try to silence him.”

Wilfrid Laurier University’s David Haskell, who strongly defended Shepherd’s academic freedom, told The Fix in an email he met Mehta at an academic freedom conference last year and has continued corresponding with him on “free expression issues.”

“In my communication with Rick, he’s never shown any dislike, let alone hatred, for any group,” said Haskell, a journalism professor. “His comments and ideas have never been racist or sexist.”

Haskell said Mehta’s detractors are “purposely” misrepresenting Mehta’s comments as hate speech, when they do not violate Canadian law. “[N]o one has ever been convicted of hate speech for statements that use civil language, are absent threats or incitement of physical violence, and reflect fair comment or factual evidence,” he said.

While Haskell said he doesn’t know what Mehta was specifically teaching, any instructor in the social sciences “should draw on topical examples from society that are familiar to the students … If he linked diverse examples to theory that needed to be covered I would call it good pedagogical practice[,] not poor pedagogical practice.”

He even compared Mehta’s practice of exploring outside his field to the famous sex researcher Alfred Kinsey, a trained zoologist who “used his knowledge of the animal kingdom to break new ground in the area of understanding sex.”

Gad Saad, evolutionary behavioral scientist at Concordia University and another Canadian free speech advocate who has faced backlash for his viewpoints, told The Fix in an email he has been in contact with Mehta.

The professor will be coming on Saad’s YouTube show “in the near future,” Saad said.

How psychology relates to anti-male bias in education

Responding to claims he spoke outside psychology, Mehta told The Fix that “all academics talk about areas outside of their expertise at some point” in the classroom and career.

According to Mehta, he “could direct the same criticism” of speaking outside one’s expertise at Matthew Sears, an associate professor of classics and ancient history at the University of New Brunswick, who has criticized Mehta on those grounds.

Sears has been outspoken about Mehta’s teaching habits, arguing that subjects such as “decolonization and multiculturalism fall outside Mehta’s field of psychology,” according to CTV News.

Mehta, a self-described first-generation Canadian, said Sears hasn’t replied to his invitation to debate him. Last month Mehta provided what he called evidence of Sears “endorsing violence against me.”

This short video provides evidence for @matthewasears (a professor at UNB) endorsing violence against me. Not very tolerant behaviour for someone who claims to advocate for diversity and inclusion. https://t.co/62OpHqIKqG

Mehta used the example of an old course on human development to explain to The Fix how he relates non-psychology topics to the courses he teaches.

“I made the argument that young minds need to have a well-rounded education so that they would be exposed to a range of perspectives” and would be able to “win people over to their side based on the strength of their ideas alone.”

He presented a “feminist critique” by showing a video clip with Christina Hoff Sommers, an American Enterprise Institute scholar and creator of the “Factual Feminist” YouTube series. After demonstrating “the argument that the education system may be biased against males, I then presented stats showing the percentage of males and females in US universities and the projections for the future.”

Mehta then cited studies that show boys’ academic performance improved “when they started classes later in the day,” which also reduced the gender performance gap: “In my professional opinion, these studies are directly relevant to human development.”

Stop talking or you could get in trouble

Mehta’s “grievance officer” – an adviser assigned to him – asked Mehta in a Feb. 28 email to “avoid any public comments on the investigation” and “your other disputes” with Acadia, in advance of possible “disciplinary proceedings followed by grievance and arbitration.”

You may feel that supportive comments from your followers and friends legitimate your views on free expression and academic freedom. But I fear that your own recent public comments could damage your credibility in arbitration.

Ramsay told Mehta he had asked Vice President Hemming to “clarify the nature of the legal obligations that motivate Professor MacKay’s investigation,” and to “explain why complaints of discrimination and/or harassment are apparently not proceeding under the specific terms of Acadia University’s Policy Against Harassment and Discrimination,” but that Hemming had not given a substantive reply as of Feb. 28.

Such a case would potentially go before a system that lacks “public transparency” and “accountability,” according to Mehta.