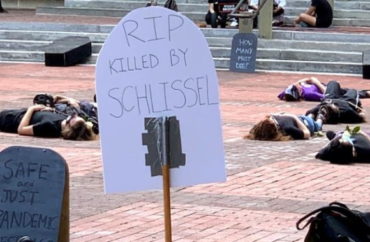 Graduate employees at the University of Michigan went on strike for two weeks this month due to concerns over the university’s response to COVID-19 and the union’s demands for the institution to part ways with law enforcement.

But the lead-up to this decision was tumultuous on campus and illustrates how at least one employee union parlayed COVID concerns into a chance to take action against campus police.

It started after a week and a half of canceled classes earlier this month. The strike followed a “die-in” graduates staged on U-M’s first day of classes.

After a September 7 vote, members of the Graduate Employees Organization, or GEO, reiterated their demands, which they said the university would have to meet if it were to reopen.

Second, GEO demanded “a universal right to work remotely without documentation, resources for remote work, better representation in the decision-making processes of the university surrounding health measures, and access to the health models motivating current policy.”

Also appearing on the list of COVID demands were funding for graduate employees with families, the abolition of a $500 fee for international students, and a $2,500 emergency grant along with rent freezes.

The first of the policing demands called for access “to a disarmed and demilitarized workplace, where lethal weapons are prohibited, our security services do not receive military funding, there is transparency around the use of surveillance technology, there is a standard of force for campus police, and no one faces retaliation for being unable to work due to police presence.”

Additionally, the union wanted the “defunding of the Division of Public Safety and Security,” the university’s campus security department. This defunding would entail a 50 percent cut to the division’s annual budget. That money would be invested in “community-based justice initiatives.”

When news of the strike first surfaced, the university’s Office of Public Affairs issued a statement condemning the strike.

“The state of Michigan prohibits public employees from striking,” the statement read. “GEO’s contact with U-M the union and GSIs [graduate student instructors] and GSSAs [graduate student staff assistants] from taking part in any action against or interference with the operations of the university.”

“The university is preparing to continue operations, including classes, in the event of a strike.”

In most classes at U-M, students will attend large lectures given by professors twice per week, along with a “discussion” section once per week with a GSI. Due to the strike, students were able to attend lectures, but many had their discussion sections canceled.

University of Michigan spokesman Rick Fitzgerald told The College Fix that the university did not have any official numbers on how many classes were affected by the strike.

The strike was set to last for a total of four days, the entirety of the work week shortened by Labor Day.

On a foot-bridge over the campus’ Washtenaw Avenue, a sign appeared which read “Demilitarize UMPD,” that is, the U-M Police Department. Unfortunately for those who posted the sign, trees blocked the “de-” in the first word, so those driving by saw a sign calling for the militarization of the university’s campus security.

As the strike was scheduled to end, GEO members rejected the university’s offer and voted to extend the strike into the next week.

The university responded by filing a court injunction on September 14 in an attempt to send the union back to work.

In a statement to the community, Schlissel said that the university could no longer tolerate the “profound disruption to the education we’ve promised our undergraduate students.”

“Undergraduates report that their remote classes have been shut down and access to course content has been blocked so they are unable to continue their studies. GEO communications show that the union’s intent is to be as disruptive as possible, particularly to undergraduate students,” Fitzgerald wrote in The University Record.

After the injunction was filed, Representative Rashida Tlaib (D-MI) tweeted out her support for the graduate students.

“Union-busting via the courts is unbecoming of a leading public institution with a rich history of labor organizing. This is shameful,” she said.

Union-busting via the courts is unbecoming of a leading public institution with a rich history of labor organizing. This is shameful.

I stand with @geo3550 and the mass student, faculty, & staff movement to demand safe working and living environments at U-M. #StrikeForSafeCampus https://t.co/HtktzGLznG

The injunction appeared to have served its purpose.

On September 16, GEO voted to accept the university’s second offer and return to work.

But the union has been emboldened by the action.

“GEO is in an excellent position following the strike. Our membership is at its highest level since right to work came into effect in Michigan. We are energized and excited to take the fight forward in the coming months,” GEO Secretary Amir Flesichmann told The Fix via email.

While the concessions the university made on policing were small, Fleischmann said that GEO was particularly proud of “forcing the university to actually bargain with us over policing.”

He called the concessions “a small but significant step that puts us in a good position for the next bargaining cycle.”

“It’s also notable,” Fleischmann said, “that within days of the strike ending the university announced the end of the so-called Michigan Ambassador program and a substantial increase to their asymptomatic testing capacity.”

Fleischmann references the Michigan Ambassadors Program which the university launched as part of its COVID reopening plan. Ambassadors would canvas high-traffic areas of campus in order to ensure that students were following social distancing guidelines.

Despite the deal, Fleischmann said that “member faith in the university administration is at an all time low.”

The administration still plans to continue relations with GEO.

“We will continue to address concerns that are raised in accordance with the collective bargaining agreement that was ratified by GEO in April,” Fitzgerald said in an email The College Fix.

“We will, of course, continue to bargain in good faith as we always do.”