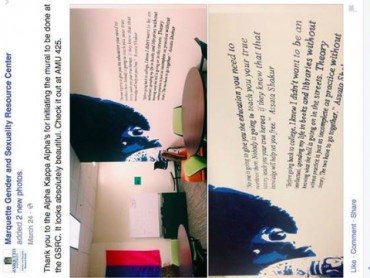 It was in a ‘remote’ building, so they didn’t see it

Marquette University is professing ignorance as to the existence of a mural honoring convicted cop killer Assata Shakur in a campus building for the past two months.

Having been made aware about the mural in the Gender and Sexuality Resource Center, the Jesuit school confirmed Sunday night it had been “removed.”

The center’s March 23 e-mail blast invited “all students to take part in painting our FIRST mural at the GSRC of Assata Shakur.”

It opened with a Shakur quote: “No one is going to give you the education you need to overthrow them. Nobody is going to teach you your true history, teach your [sic] your true heroes, if they know that the knowledge will help set you free.”

A review of the center’s Twitter posts during the same period suggests that it maintained two distinct Facebook profiles at the same time – one still active and the other either defunct or since set to private.

The controversy over the center’s endorsement of Shakur appears to have begun just last week with Marquette professor John McAdams.

Marquette is trying to fire McAdams for publicly criticizing a colleague who was caught trying to shut down debate on gay marriage in a philosophy class. He remains barred from campus as he appeals.

McAdams pointed out the Shakur mural and the center’s promotion of it in a Saturday blog post that explained the convict’s background.

The center was “set up as a sop to the campus gay lobby” after Marquette declined to hire an “aggressively lesbian” candidate for dean, McAdams wrote. He noted that previously the center had been set to sponsor a feminist seminar that was so “raunchy” – including a “cunt coloring book” – the school pulled its sponsorship after an outcry.

Shakur “is the sort of person the ‘sexuality’ bureaucrats at Marquette feel deserves to be honored,” McAdams concluded. University spokesman Brian Dorrington told The College Fix in an email that the mural “is extremely disappointing as the mural does not reflect the Guiding Values of Marquette University.

“It is being removed immediately,” he continued. “We are reviewing the circumstances surrounding the mural and will take appropriate action.”

Dorrington said the leadership of the university had only recently been made aware of the mural, claiming it “was created and displayed in a remote area of campus.”

The center’s office is on the fourth floor of the student union, which itself is in the middle of campus, McAdams said.

The larger issue is the school’s ongoing practice of installing “bureaucracies to cater to the demands of politically correct victim groups” where “a very narrow and insular worldview prevails,” McAdams wrote.

In those places, “Those folks don’t seem to realize that glorifying a cop killer is a bad thing to do,” he said: The issue provides “a window on the culture of political correctness at Marquette.”

The center’s Twitter feed shows that it was running two distinct Facebook profiles in March, when the mural went up, sometimes tweeting links to each profile consecutively.

On March 23 and 24, the center tweeted five times explicitly about the mural, with two of those linking to Facebook pages under the profile “marquette.gsrc” which are “currently unavailable.” Another tweet with no content simply links to the marquette.gsrc profile with the same “unavailable” notice.

Today, the Alpha Kappa Alpha Sorority will be painting the first mural in the GSRC! Everyone is welcome to join… http://t.co/gWnPSbGWiY

But the next-to-last tweet, thanking the Alpha Kappa Alpha sorority for “initiating” the mural, goes to an unavailable page with a different template at the center’s active Facebook profile, “GSRCMarquette.”

Thank you to the Alpha Kappa Alpha’s for initiating the mural to be done at the GSRC. It looks absolutely… http://t.co/39wPzP69Eo

Unlike the first “unavailable” template, which says “you may not have permission to view this page,” the second template says “The link you followed may be broken, or the page may have been removed.” The final two tweets about the mural went up two minutes apart.

The same jumping between different profiles is evident in the previous week of the center’s tweets.

That screengrab remained live as of early Tuesday morning. Sorority urges its chapters to ‘thoroughly’ vet anyone they promote

As word of the mural spread, critics took to the resource center’s Facebook page to voice their outrage.

One comment that has since been removed from the page read: “Reprehensible! Disgusting that you would glorify a convicted murderer, a killer of human life!?!!”

It was posted by Gay Anne Birkholz, the mother of a local police officer “who was killed by a suspect in 2011,” the Milwaukee Journal Sentinel reported.

“Shame on you for honoring a cop murderer,” wrote another commenter.

The Gender and Sexuality Resource Center did not respond to requests for comment about how and why it chose Shakur for the mural.

Shakur is a “Most Wanted Terrorist,” according to the FBI, convicted of murdering a state trooper in 1973 and then escaping to Cuba in 1979, where she has remained ever since.

Alpha Kappa Alpha’s national organization released a statement implying it disapproved of the mural but saying the school should have known about it.

Its Marquette chapter worked with the gender center “to determine a theme and imagery for the mural” and it was painted by that chapter “along with other university staff and students,” the statement read, according to student-run website Marquette Wire Monday.

“Unfortunately Ms. Shakur’s entire history and background was not fully researched,” the statement continued. “If that process had occurred, she would not have been featured in the mural.”

The national sorority said its members do not “condone, promote or tolerate the killing or violent activities of anyone,” and it’s “in the process of reminding all of its chapters … about the importance of thoroughly vetting any person who might be promoted by the sorority before any action is taken.”

At least one Alpha Kappa Alpha veteran remains a fan of Shakur.

The former president of its chapter at Howard University, where the sorority originated, says on her LinkedIn account that she “looked up to radical leaders such as Assata Shakur, Marcus Garvey, and Sheryl Sandberg.”