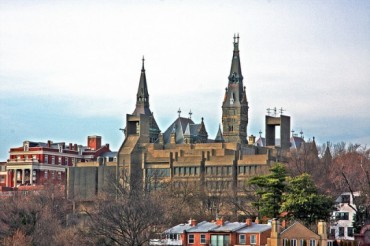 A Washington D.C.-based private Catholic university is slated to offer a class next semester that is expected to teach students how to promote and protect abortion coverage provided under the Affordable Care Act.

The course, “Regulatory Advocacy: Women and the Affordable Care Act,” is set to be taught at Georgetown Law, and it has upset staunch Catholics, according to The Cardinal Newman Society, which first reported on the new academic offering.

“We have long warned about Georgetown scandals that undermine the Church’s strong defense of innocent life,” Patrick Reilly, society president, told Catholic Education Daily. “But here students are being required to work for a pro-abortion lobby, making America’s oldest Catholic university an active agent of the culture of death.”

The course will hone in on “regulatory advocacy as it pertains to the implementation of the Affordable Care Act and women’s health,” and calls on students to work with the National Women’s Law Center “to develop projects that will assist in the organization’s regulatory advocacy efforts.” The law center publicly supports Obamacare and its mandate requiring religious institutions provide insurance coverage for abortions and other birth control.

The class will be taught by Professor Kelli Garcia, senior counsel at the National Women’s Law Center. She oversees its efforts to “address religious restrictions on women’s access to reproductive health services,” according to her online Georgetown profile.

Catholic Education Daily, in reporting on this issue, points out Garcia has written a love poem in honor of Planned Parenthood, supports the abortion mandate, and has proclaimed that institutions that refuse to provide contraceptive coverage are simply using their religion to discriminate against women.