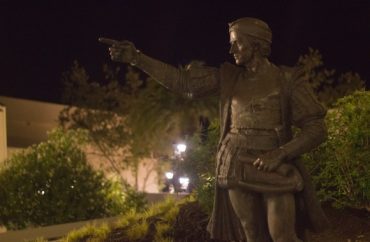 Pepperdine University will remove a statue of Christopher Columbus from its main campus after students at the Southern California Christian school made multiple demands to take it down.

Currently located above the university’s amphitheater, the statue will be relocated to Pepperdine’s campus in Florence, Italy, President Andrew Benton told the university’s liberal arts undergraduates in a Monday email.

Relocation will take time but the process has already started, Benton wrote. In an email to The College Fix, the university confirmed the relocation but didn’t provide further comment.

The statue, donated to the university in 1992 by a group representing the Columbus 500 Congress, has drawn pushback recently from Pepperdine students. Benton has previously described the group that funded the statue as “Italian-American friends” of the university.

Pepperdine’s student newspaper, The Graphic, reported that around two dozen students took to the statue’s location on Columbus Day last semester and chanted “take it down.” A written statement from the protest group, “Waves Against Columbus,” claimed the statue is “a celebration of genocide and racial oppression.”

The document also claimed the statue of the Italian explorer constitutes “a prioritization of nominally esteemed university donors above the cultural acceptance and personal experience of marginalized students.”

The statue also drew the ire of protesters at a demonstration in “solidarity” with University of Missouri black students in November 2015. In a list of demands, protesters called for the sculpture of Columbus to be removed “from any University location open to any students and/or general public.”

It’s the second art-related victory in the past year for the school’s racial activists over the administration.

Last summer, The Graphic reported, Benton removed a wooden mural that was targeted by the November 2015 protesters. Hung in the campus cafe, it depicted “Father [Junipero] Serra next to a mission, wildlife and conquistadors and a Spanish colonel prominent in the center of the piece alongside a group of Native Americans in the lower right corner.”

In his Monday email, Benton told students that “stories of conquest and the art associated therewith are painful reminders of loss and human tragedy” for many, including those at the university, which is affiliated with the Churches of Christ tradition.

Columbus’s exploration was taught for many years in American schools as “heroic and exciting,” he wrote: “Later, as the impact of the arrival of explorers was assessed more fully, especially as those impacts related to indigenous people, a different view formed.”

Those who donated the sculpture “meant to honor the good attributes of [Columbus’s] life” and “they did not mean to offend,” Benton wrote, saying the removal decision came after reflection and consultation with university stakeholders.

Benton said a campus forum will be scheduled this month to discuss the decision and “consider other national issues” relevant to campus diversity.

In a statement to The College Fix, the university’s Black Student Association extolled the president’s decision.

“We are happy to finally see this come to fruition. We thank everyone involved in this movement for their hard work and dedication towards fighting for this cause,” the organization said. “We are humbled to contribute to this work of justice.”

In response to the news, one student tweeted “Pepperdine is getting rid of our Christopher Columbus statue! Progress!” Another student replied back “I am so excited about this!”

HONEST TWEET: the statue moving to Italy is Pepperdine PUTTING UP with people not AGREEING with them. #imjustsaying #atmetho

When @pepperdine is moving a statue that represents genocide to Florence. Sis it cost $35 to send a piece of ?there. #MyTuitionAtWork