At the University of Massachusetts Boston, well known as a commuter campus, Interim Chancellor Katherine Newman is being protested as a hypocrite after writing books that bemoan income inequality but approving a 150 percent hike in parking fees.

One poster on campus asks, “How can this expert on inequality demand that students and low-wage workers pay more to park than tenured faculty?”

Another declares “Chancellor Newman has made a living writing about inequality, but she still remains silent while her administration makes students and low-wage employees pay more for parking than tenured faculty.” 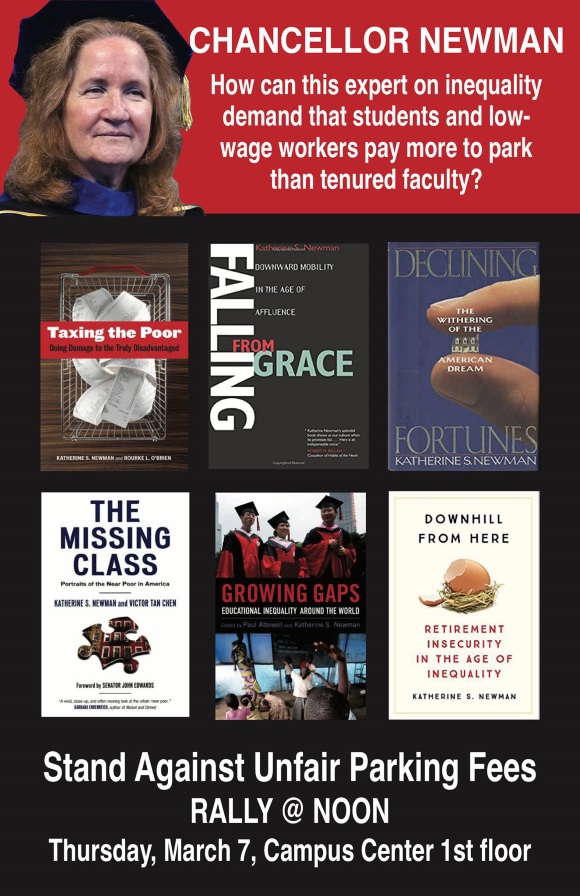 “The ‘parking strike,’ where protesters flagged down drivers, explained their concerns, and urged them to park off-campus or take public transport, was a response to the change in all-day parking rates at on-campus garages from $6 to $15 a day,” CommonWealth Magazine reported.

At issue is the university’s new $69 million Parking Garage West.

Completed in September 2018, “administration officials have said the higher parking rates are needed to cover the cost of operating the new garage,” CommonWealth reported.

The decision took place under Newman, yet she is also a vocal advocate for the poor.

Despite these titles, it is unclear how far her sympathies go for the cash-strapped college students she represents.

What’s more, some have argued the West Garage was an unnecessary expense given that there are multiple functioning parking lots on campus already. The new facility, a 500,000 square foot concrete structure, added 1,400 spaces to the campus.

But the parking lot appears to be sparsely used so far.

One student, Meaghan Grant, told the The College Fix that she finds the recent hike “disappointing” adding that she “specifically chose to attend UMass Boston because of their advertising of being a low-cost option for underprivileged students.”

“UMass Boston has consistently stressed that it is a commuter school with many of the students being low income so the fact that they have no problem hiking the prices by 150 percent is disturbing and abhorrent,” she said.

Newman has yet to personally respond publicly to the criticism.