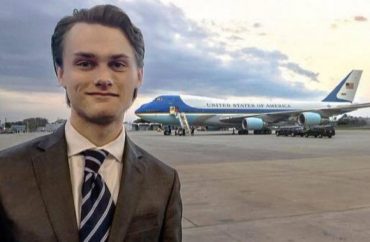 A student says he was suspended from Rollins College for challenging his Muslim professor’s anti-Christian assertions, including her claim that Jesus’ crucifixion never took place.

Twenty-year-old Marshall Polston, a sophomore at the private, Florida-based four-year college, said that the professor of his Middle Eastern Humanities class also told students that Jesus’ disciples did not believe he was God.

Polston, an avid traveler and self-described Christian, has toured the Middle East and is familiar with the Muslim culture.

“Honestly, it reminded me of some of the more radical groups I researched when abroad,” Polston told the Central Florida Post about his professor’s comments on Jesus.

“Whether religious or not, I believe even those with limited knowledge of Christianity can agree that according to the text, Jesus was crucified and his followers did believe he was divine… that he was ‘God,’” he continued. “Regardless, to assert the contrary as academic fact is not supported by the evidence.”

Polston, in a message to The College Fix on Saturday, said he stands behind his assertions in the Post article. He said he is upset he was suspended and has hired an attorney.

“Our university should be a place where free-speech flashes and ideas can be spoken of without punishment or fear of retribution,” Polston told The College Fix. “In my case it was the total opposite. … I came forward with the story because I know so many other students like me suffer under today’s liberal academic elite.”

The professor, Areej Zufari, as well as a campus spokesperson, could not be reached by The College Fix late Sunday. However, the Central Florida Post reports that it tried numerous times to obtain comment from Rollins College and Professor Zufari to no avail.

Polston claims the situation began after he challenged Zufari’s assertions about Jesus and his disciples. Polston said this challenge led Zufari to file a complaint with a campus dean, claiming he made her feel “unsafe.”

Next, Polston received a 52 percent on a major essay.

“I was upset, understandably. I’ve never gotten anything less than straight A’s, so I was really interested in figuring out how to possibly improve or at least understand the grade,” Polston told the Post.

On another day during the course, Zufari led a discussion about the application of Sharia Law. Polston claims that during this discussion, a male Muslim student said gays and adulterers should be beheaded under Sharia Law.

“I spoke out to the professor about the grade and subsequently the decapitation comments made by the student,” Polston told The Fix. “The statement by the conservative Muslim student met such fear by some that one of the students reported it to the FBI. Later, I was reported by the professor to the dean of campus safety. The situation was surreal. We’ve already had one too many attacks in Orlando and as an avid traveler I realized this was the perfect example of ‘see something, say something.’”

Zufari, for her part, posted on Facebook to the ACLU of Florida, complaining about an unnamed student that is “making my life hell this semester. This one is spewing hatred at me, de-railing class, and just sent me a hateful email threatening me…I want to know if there is a way to hold the individual responsible for his harassment and hate speech. Any ideas? Thank you!”

According to the March 24 suspension letter, Polston’s “actions have constituted a threat of disruption within the operations of the College and jeopardize the safety and well-being of members of the College community and yourself.”

Those alleged actions are not spelled out within the document. Nonetheless, Polston was given strict directions not to set foot on campus or have any contact with Zufari in the letter.

However, claims that Polston violated the terms of his suspension and came to harass the class this past Thursday were lodged. A campus safety report obtained by The College Fix states:

“Student ______ stated to me that she looked out the back glass door of the classroom and saw Mr. Polston staring into the room. He briefly stopped then proceeded on his way. Campus safety was immediately notified and responded at 19:36 hours. A search was conducted but Mr. Polston was not found. Ms. Zufari’s students were upset and did not feel comfortable being in the class. Ms. Zufari dismissed her class early at 20:07 hours.”

Polston has completely refuted these claims, however, offering video footage of his whereabouts — at a restaurant over a half-hour away from the school.

As for Rollins College, this isn’t the first time its officials have acted unfavorably toward Christian students.

In 2013, college officials kicked a Christian group off of campus for their conservative beliefs and threatened to pull funding from Christian student groups that would not allow non-Christian students to be in the club’s leadership. Later that year students were told that they could not hold private Bible studies in their dorm rooms, Fox News reported.

Zach Swaim contributed to this report.