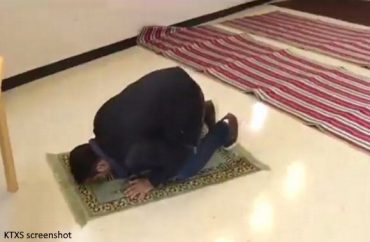 A Christian university in Texas has created a prayer room for its Muslim students.

The Methodist-affiliated McMurry University dedicated the space in one of the school’s residential dorms for its Muslim students’ daily prayers.

Before its creation, Muslim students met for prayer in a nearby hotel, a student who helped establish the new prayer room told The College Fix in an interview.

That student, Joe Yousef, is president of McMurry’s Saudi Student Club. Of the roughly 1,000 students attending McMurry, about 60 are Muslim and many come from Saudi Arabia, Yousef said.

Yousef said now that Muslim students have a prayer room on campus, it will be much easier for them to meet both their religious and scholastic obligations.

“On Friday, we get together and sometimes we have to go home to pray and we need to be in university so we don’t have time to go home,” Yousef said.

Yousef admitted that some people at McMurry didn’t like the idea of having the prayer room.

Some students are also supportive.

“Being Christians, we should be open to free religion and letting everyone do what they want to do and I think the Muslim prayer room gives them that chance,” student Hector Flores told BigCountry.com.

McMurry’s chaplain, Jeff Lust, and Dr. Mark Waters, professor of religion and director of international education, reportedly helped the students in their effort. Lust did not respond to a request for comment from The College Fix.

McMurry’s associate director of communications, Gary Ellison, did not respond to requests for comment either.

Lust told KTXS that the room is “a step in the right direction.”

“We anticipate over time we’ll have students from a variety of countries and possibly different religions,” Lust said. “We need to learn to live and work together in this world that is increasingly diverse and then we can truly become better together.”

The room will also serve as a meeting place for a new interfaith club, which is slated to meet for the first time Feb. 21, according to Yousef.

He said he will help lead the interfaith club in the hopes that it will help students of different faiths understand each other better.

“We are going to talk about faith and belief,” he said. “Some people have their own bias. We want people to get together, so we can help each other out.”