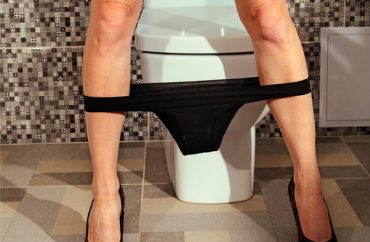 A Philadelphia high school student joined on as a co-plaintiff in a lawsuit against her district after being told by school officials to “tolerate” having to use the girls’ bathroom … with boys.

In a Philadelphia Inquirer op-ed, Alexis Lightcap details her ordeal, noting “It’s amazing to think that one quick trip to the bathroom can change your life”:

I was a junior in high school when I ducked into the girls’ room at school one day to find … a boy. I froze. Three years at this particular school, and that had never happened to me before. The girls’ bathroom had always been the girls’ getaway place — a place for privacy, mostly, but also a little refuge — a place to get away from boys, maybe talk about boys, but not meet boys.

Lightcap joined the Doe v. Boyertown Area School District lawsuit which concerns a situation similar to her own — a “male student who involuntarily encountered an undressed female student while changing in the boys’ locker room.” A former victim of foster care, she notes the plaintiff in that case did just what she did — informed a school official — but, like Lightcap, was told to “tolerate it” — to “make it as natural as possible.”

A federal judge sided with the district last month, but Lightcap and her co-plaintiffs are considering their options:

As one of my attorneys said after that decision, “The Supreme Court has already spoken: The real differences between men and women mean that privacy must be protected where it really counts, and that certainly includes high school locker rooms and restrooms.”

The American Civil Liberties Union of Pennsylvania, which has intervened in the case, has argued that the school district is doing its best to respect the rights of transgender students.

“We’re hopeful that this sends another signal to schools in Pennsylvania and around the country that they need to implement policies that respect students’ gender identity,” she added, following another federal court decision in favor of the school at the time. …

Lightcap argued that despite what the media portrays, students with objections to new bathroom policies are not “bigots” or “religious extremists.”

“I guess it’s always easier to label people than to think about where they’re coming from,” she argued.

“I don’t have a problem sharing a bathroom with someone who identifies as transgender — provided they are the same sex I am,” she added.

“I do have trouble with a policy that says anyone who’s in an opposite-sex mood today can stroll in and observe me in my intimate moments — and with school officials who value the feelings of a few students more than the dignity and privacy of all those in their care.”

Indeed, one of the parties referring to those like Lightcap as “extremists” has been the ACLU.