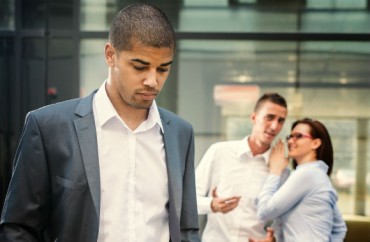 Racial protesters at Claremont McKenna College created an enemies list of administrators and students who are racial minorities but disagreed with the protesters’ goals or otherwise earned their spite, the Claremont Independent reported Thursday.

First hinted at in a Facebook page mocking the “gross boys” of CMC – including both male and female staffers of the right-leaning Independent – the “shady person of color” (SPOC) list was made public Wednesday by Hannah Oh, the former Independent editor-in-chief.

Being named on the list was the last straw for one so-called SPOC, who said he plans to transfer out of CMC because it is not willing to provide “a safe environment” for students who dissent from the orthodoxy of student radicals.

“It’s straight out of [the movie] Mean Girls,” Oh told The College Fix over Twitter direct messages. “This SPOC list is like their Burn Book. It’s so immature and unproductive, and they seem to have no problem with students continuing to transfer out of the school in direct response to their bullying.”

The newspaper said it obtained a screenshot of the list from a disaffected protester. Independent editor-in-chief Steven Glick connected that person with The Fix, though the former protester declined to comment further in a Facebook message.

The Fix has confirmed that person is a former organizer for the activist group CMCers of Color.

In a Google Docs page, CMCers of Color circulated a private wish list of items that progressive minority students wanted in their permanent “safe space” when the administration gave them a promised Resource Center.

In addition to kitchen items and a sound system, the list included a pin board featuring a dream team of the racial movement’s loudest objectors, all of them “SPOCs.”

“Shady people/person of color” is a snarl phrase that has been deployed against minority students who “dissented from the protest movement” at Claremont throughout this year, said the Independent in its Thursday report.

Also listed among the “board of quotes” on the list: “White tears,” “Drag them,” “Pls.”

Though the five-person list only included two full names, the Independent attempted to identify the others and speculated why each “SPOC” was on the list.

The SPOC board includes a royal court of the CMC community who had found themselves on CMCers of Color’s bad side – either by opposing the group, or through mere incompetence in supporting the movement.

Another student plans to leave in response to harassment by activists

The “King SPOC,” identified as Assistant Dean of Admissions Brandon Gonzalez, earned the wrath of CMCers of Color by leading a diversity initiative that the protesters “felt misrepresented CMC,” the Independent said.

RELATED: Undergrad links to Obama’s comments about students being ‘coddled,’ gets ripped by peers

In an email to The Fix, Gonzalez said he disagreed with his “SPOC” designation but declined to comment further.

As Independent editor-in-chief when CMCers of Color made their demands to the administration last fall, Oh was deemed “Queen SPOC.” She had joined a staff editorial savaging administrators and students for their response to protesters’ demands, including the resignation of Dean Mary Spellman, and harassment of a dissenting minority student.

"The protestors are the most racist group on campus I've seen to date." Yup. https://t.co/5Vz2mH4C7q pic.twitter.com/xJO45rp9S3

The “Ignorant SPOC,” identified as student Nathaniel Tsai, wrote a letter anonymously co-signed by more than 300 students in opposition to the protesters’ demands. (His entry also labels him “town drunk” with no explanation.)

“I do not believe that the school administration nor student government fosters a safe environment for ALL students, regardless of POC status,” Tsai wrote in a Facebook post late Thursday.

Tsai is the second known CMC student to promise to leave over the school’s treatment of viewpoints that go against the protesters. Kate Hartman, who was savaged by her peers for citing President Obama’s comments about “coddled” students, was “accepted as a transfer to other universities” after she got fed up with CMC’s environment, her mother wrote in an April 26 letter to CMC.

‘God is watching … especially you’

The “Prince SPOC,” identified as student Tony Sidhom, was vocal in raising his concerns with protesters’ tactics at Student Senate. The Court Jester SPOC, student David Brown, was critical of the protesters’ lack of organization and debating skills as well as their heavy-handed tactics.

The Facebook page “Pray for the Boys of Claremont” specifically named Independent Managing Editor Jose Ruiz under its prayer request for “Shady People of Color,” though it removed his name after commenters accused the page of harassment. The page also removed a group photo of Oh, Glick and Independent Publisher Taylor Schmitt. A year ago, CMCers of Color presented a list of proposed actions to the administration, according to The Student Life. Amid calls for the removal of Spellman, those “proposals” turned into demands in November letter presented to Spellman and President Hiram Chodosh by CMCers of Color and other racial affinity groups.