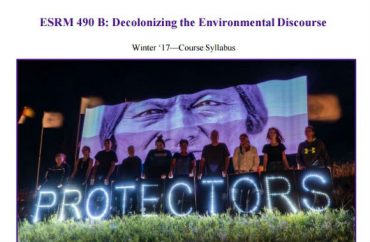 Revised to say ‘attendance is not mandatory’ after our query

University of Washington students protested the Dakota Access Pipeline (DAPL) after they learned about it in a new class that mixes social justice and environmental science.

Whether the protest was voluntary or not depends on how they interpreted their instructor’s syllabus.

Twenty students learned about environmental racism, reading papers such as “Destabilizing the Settler Academy,” in addition to hearing guest lecturers and attending the “DeFundDAPL” rally before a Seattle City Council committee meeting.

Two days after The College Fix first inquired about the class, whose syllabus said students “will participate” in DeFundDAPL or make a protest sign if they couldn’t attend, a revised syllabus was uploaded saying the rally was voluntary.

The class goal was to “teach environmental science through a decolonization lens” and give a “voice to those who have been silenced in the official environmental discourse,” according to the syllabus.

Veronica Keenan, a second-year graduate student in the UW School of Education, told The Fix in an email she was pleased with the course topics, which included “food sovereignty, ecofeminism, access to clean water, restorative justice, and climate change inequity.”

These issues could benefit from decolonial analysis, Keenan said, since they “disproportionately impact disadvantaged communities.” Among those groups, as defined by the syllabus, are African Americans, Native Americans and women.

Keenan said science has long been dominated by scientists, policymakers and others who are not from “disadvantaged communities.”

“By decolonizing environmental discourse, we seek to raise up those whose viewpoints or concerns have previously been silenced or ignored and bring them to the forefront of environmental action,” she told The Fix. Everyone in class “enjoyed engaging in discussions about these important topics.”

Each week of the term had a different focus.

During the week marked “Dismantling the Patriarchy in Environmental Discourse,” students watched the video “Eco-Grief and Ecofeminism” and also learned about women of color in the environmental movement.

In another week, the Feb. 1 class was canceled. In yellow highlighting, the syllabus listing reads:

For class: Take a picture at the rally. If you cannot attend for any reason, create a #NODAPL poster and submit it me on class next Monday.

The Fix contacted Hernandez Monday to talk about her class, and then UW media relations Tuesday.

She responded Wednesday morning in an email that also went to Daniel Vogt, her faculty teaching mentor for the class. Two media relations officers and another graduate student who gave the guest lecture on #NODAPL were copied in the response.

Hernandez said she canceled the Feb. 1 class “due to the class’ request” after they heard the #NODAPL lecture the previous week.

“Students were not forced to attend a rally,” she said. “The majority of students” were already planning to attend the event, which took place at the same time as class and preceded a Seattle City Council Finance Committee vote to divest city money from Wells Fargo because it lended to DAPL.

Students were told that “they could meet me at my office for office hours to work on their symposium presentations” if they didn’t want to cancel class: “We even told students who could not or did not want to attend that was okay and that there were no questions that were not going to be asked.”

Every student attended class that day, “so all the students heard their options,” and “95%” chose to attend the rally, Hernandez said.

She emphasized to students they could do activism that doesn’t involve rallies, which can “fail to be inclusive of ability and accessibility,” and some students ended up not going: “They were not punished or received less points for not attending.”

She said she ended up not going to the rally either. Last fall Hernandez shared a petition on social media asking UW President Ana Mari Cauce to “stand with Standing Rock,” the tribe affected by DAPL.

“It is important to honor the indigenous lands UW stands on with more than just words—also ACTION!” she wrote in the post. “#BreaktheSilence #WaterisLife”

Student Keenan said she went to the rally. “They had speakers and some song and prayer led by Native Americans,” but “I wouldn’t necessarily say the rally was informative.”

Two days later, ‘students have the option to participate’

By Wednesday evening, the syllabus initially reviewed by The Fix had been removed and another uploaded in its place.

In the same place as the original syllabus, without the yellow highlighting, the Feb. 1 listing read:

Class Cancelled upon 99% of students’ requests Students have the option to participate in. DeFundDAPL: Vital City Council Meeting—attendance is not mandatory.

For class: If you decide to attend, please take a picture at the rally. Students’ attendance is not mandatory for the rally. Office hours will be held during this time to discuss symposium presentations. Hernandez did not respond to follow-up inquiries on why the syllabus was revised.

Before the revised syllabus was posted, Keenan told The Fix that indeed the rally “wasn’t required” for class, “but if we didn’t we were supposed to make a poster and submit it to the professor,” meaning instructor Hernandez.

Students were ‘so enthused’ with Hernandez leading

The class was so popular the school is offering it again for spring quarter, though this time it will be through the American Indian Studies department. Hernandez is slated to teach it again.

Her faculty mentor Vogt, an ecologist at the university, told The Fix in a phone interview that he attended every meeting of the class.

Vogt spoke highly of Hernandez’s work. In some courses, getting students to talk is “like pulling teeth,” but in this one they were “so enthused about interacting in class.”

Hernandez was also profiled by the School of Marine and Environmental Affairs, where she’s pursuing her master’s degree, a month before she started teaching the winter class.

The department’s promotional flyer for the spring class features an image of DAPL protesters and notes that the DAPL project will be explored. UPDATE: The headline and some internal headings for the article have been amended.