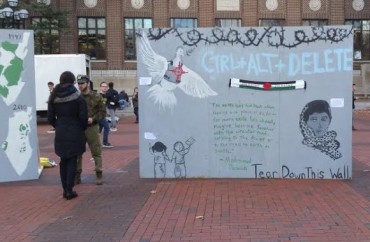 A Jewish student at the University of Michigan who was the subject of an ethics investigation for aggressively questioning peers who set up a pro-Palestinian display in the quad has been cleared of any wrongdoing.

A student government ethics committee has ruled that student Jesse Arm was within his First Amendment rights when he called the display offensive and told his peers to take it down.

A visibly upset Arm had confronted members of SAFE, who set up the pro-Palestinian display on Nov. 19, after his friend, an American Jewish student studying in Israel, was killed by a Palestinian gunman earlier that day.

A video of the incident shows Arm, a member of the student government, remained largely civil and never got “[Student government] representatives should be held to a higher standard than the average student. However, while representatives … do represent all of their constituents, we do not shed our own personal opinions and beliefs when we decide to run for office,” the ethics committee stated in a report summarizing its conclusion.

It added Arm “remained well inside his First Amendment rights” even though he was “passionate and cares deeply” about the issue.

The ethics committee used the video of the incident to help make its determination.

The committee had the option to recommend that Arm be issued “a minor warning, formal warning or formal reprimand.”

The display in question showcased two mock 8-by-12-foot walls that represented the 25-foot security wall separating Israel from the West Bank. On one wall, an image of a dove with a sniper’s crosshair aimed at its chest was emblazoned just under a portrait of barbed wire. Student demonstrators dressed as Israeli soldiers play acted with interested students in an attempt to illustrate what it would be like to try to get through the checkpoint if they were Palestinians.

Arm appeared on a local Ann Arbor radio show on Dec. 5 saying he was ready to move on from the entire ordeal.

Arm’s probe marked the first time the ethics committee has taken up a case, according to its report.