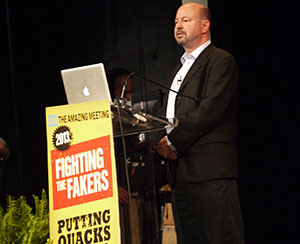 There’s new activity in the laughably pathetic move by Michael Mann, director of Pennsylvania State University’s Earth System Science Center and “ClimateGate” participant, to muzzle critics of his methodologies by suing them.

The Cato Institute, Reason Foundation, Individual Rights Foundation and Goldwater Institute filed a friend-of-the-court brief Monday in the D.C. Court of Appeals, asking it to overturn a boneheaded decision by a lower municipal court to let the case proceed.

As National Review editor Rich Lowry said two years ago when Mann first threatened to sue his critics into silence:

In common polemical usage, “fraudulent” doesn’t mean honest-to-goodness criminal fraud. It means intellectually bogus and wrong. I consider Mann’s prospective lawsuit fraudulent. Uh-oh. I guess he now has another reason to sue us.

Usually, you don’t welcome a nuisance lawsuit, because it’s a nuisance. It consumes time. It costs money. But this is a different matter in light of one word: discovery.

If Mann sues us, the materials we will need to mount a full defense will be extremely wide-ranging. So if he files a complaint, we will be doing more than fighting a nuisance lawsuit; we will be embarking on a journalistic project of great interest to us and our readers.

Unfortunately for people who believe that freewheeling academic debate trumps the power of the state to decide what science has revealed to be true, Mann temporarily has the upper hand, as the Cato Institute says in summarizing the think tanks’ appeals brief:

The D.C. trial court rejected the defendants’ motion to dismiss this lawsuit, holding that their criticism could be taken as a provably false assertion of fact because the EPA, among other bodies, have approved of Mann’s methodologies. In essence, the court seems to cite a consensus as a means of censoring a minority view. …

We argue that the First Amendment demands that failing to leave room for the marketplace of ideas to operate stifles academic and scientific progress, and that judges are ill-suited to officiate policy disputes—as history has shown time and again. The lower court clearly got it wrong here—and there are numerous cases where courts have more judiciously treated similarly harsh assertions for what they really are: expressions of disagreement on public policy that, even if hyperbolic, are among the forms of speech most deserving of constitutional protection. The point in this appeal is that courts should not be coming up with new terms like “scientific fraud” to squeeze debate over issues impacting government policy into ordinary tort law. Dr. Mann is not like a corner butcher falsely accused of putting his thumb on the scale or mixing horsemeat into the ground beef. He is a vocal leader in a school of scientific thought that has had major impact on government policies. Public figures must not be allowed use the courts to muzzle their critics. [emphasis added]

Read the think tanks’ appeals brief here. Cato lawyer Ilya Shapiro gives a more casual history of the case, with the commonsensical headline “People Shouldn’t Be Able to Sue Think Tanks When They Disagree with Us,” here.