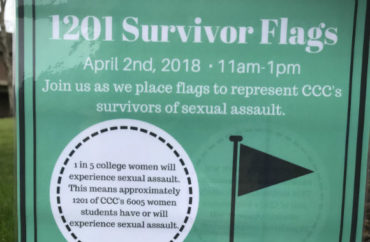 OREGON CITY, Ore. – According to Clackamas Community College’s three-year security report issued last year, there were no reports of sexual assault or fondling on its main campus or two satellites in 2015 or 2016. The last such report among 26,000 students – fondling – was in 2014.

According to the Associated Student Government and Title IX office, those statistics are bunk.

They created and posted flyers around the main campus that claim 1,201 out of 6,005 female students there “have or will experience sexual assault” at some point, and that make a variety of sexual-violence claims without citing sources.

The College Fix was referred to multiple college officials while attempting to determine the process by which the flyers were designed and how their content was chosen.

One thing seems clear: The 1-in-5 statistic commonly peddled by anti-rape activists probably doesn’t apply to a community college like CCC.

Two main flyers that gave statistics about sexual assault and victimization were posted for Sexual Assault Awareness Month, which is spearheaded by the National Sexual Violence Resource Center. It sells merchandise that reads “Believe survivors” and “End victim blaming” among other slogans.

The Fix saw the first flyer posted on the quad, around a patch of grass, on the main Oregon City campus and on the Harmony campus, but did not visit the Wilsonville campus to see if it had one as well.

This laminated teal flyer invited the community to help plant 1,201 “survivor flags” on April 2 to represent the approximate number of CCC women who have or will experience sexual assault, as well as to plant one for themselves or someone they know. It’s marked with ASG’s logo, phone number and social media profiles.

It’s not clear how the student government determined CCC has 6,005 female students out of a total student population of 26,000. The Fix did not notice different survivor estimates between the Oregon City and Harmony flyers. A spokesperson for CCC did not immediately respond to a Fix query seeking an explanation. 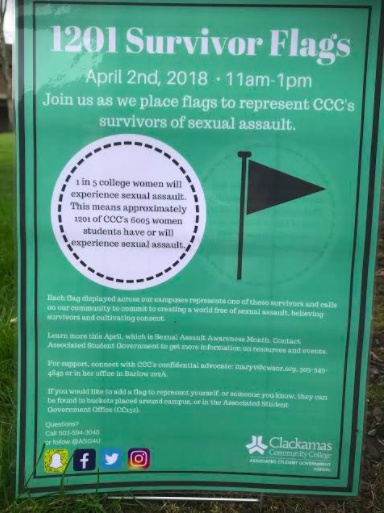 The second flyer, which was mint green, was plastered on the walls and doors of the main campus. It featured the logos of ASG, the Title IX office and the National Sexual Violence Resource Center, as well as Title IX officials’ contacts.

This flyer offered several “facts” about sexual violence, including the rate excluding rape for women (1 in 2) and men (1 in 5) and rates of attempted or completed rape for women (1 in 5) and sexual abuse of boys under 16 (1 in 6). It claimed two-thirds of rapes “are estimated to go unreported,” and fewer than 5 percent of completed or attempted rapes are reported to law enforcement.

Though each statistic had a number representing a footnote, the flyer did not contain actual footnotes that listed the source of each statistic.

Regardless of how many women attend CCC, the 1,201 estimate is based on the 1-in-5 figure for sexual assault of college women first popularized in a Justice Department-funded study in 2007. The study’s authors have publicly disavowed that their work is nationally representative and acknowledged its methodological shortcomings.

Though the 2007 study only collected data from female seniors at two universities in the South and Midwest, the authors followed up with a 2016 survey of nine schools.

About one in 10 undergraduate women across these nine schools, responding to an opt-in online survey, reported “completed sexual assault” (“one or more incidents of unwanted sexual contact”) during the 2014-2015 academic year. This rate varied from 4.1 percent at one school to 20 percent at another. The male estimate average was 3.1 percent, ranging from 1.4 percent at two schools to 5.7 percent at another school.

Percentages also varied widely between schools for completed assaults from the start of a college career, from 12 percent on the low end to 38 percent at the high end, and 21 percent across all schools. When asked if they had been assaulted in their lifetimes, the nine-school average was 34 percent and ranged from 26 percent to 46 percent at each school.

MORE: Sexual-assault study authors disavow how their work is portrayed by activists 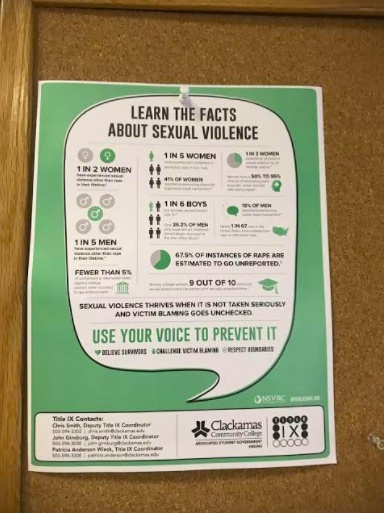 Author Christopher Krebs told The Fix that while the authors cannot give out names of the nine schools due to a confidentiality agreement, the study did include two-year campuses. This might suggest that those campuses with lower rates of reported incidents are the two-year schools, which tend to offer minimal on-campus housing.

Though the teal flyer invites the community to call ASG with questions, Vice President Daniel Romero Vazquez seemed unprepared for questions about it.

Asked about the use of the 1-in-5 statistic on a campus where it’s probably not accurate, and why the “1,201” flyer doesn’t mention male victims, Vazquez told The Fix over the phone:

I would actually have to check the flyer since it wasn’t me who created the events. It was actually a partnership between Title IX and members of [ASG]. I’m not directly involved with the creation of everything.

He put The Fix on hold for about seven minutes while he examined the flyer outside the office. Vazquez then recommended asking John Ginsburg, director of student leadership and engagement, who is “in the forefront” of the awareness month. Ginsburg is also listed as deputy Title IX coordinator on the mint-green flyer.

In office interviews with The Fix, college officials defended the claims and general thrust of the flyers, while attributing any shortcomings to the newness of the awareness effort at CCC.

Believing survivors means let’s sit down and understand each other’s experience. Let’s believe what that person said, he or she has experienced, that we have experienced. It may not be the truth, as has been determined, but it is that person’s truth and what they were going through.

Wieck also said there should be an investigation for the truth, but she did not make a clear distinction between believing survivors and following the evidence.

By having conversations and believing claims, victims of sexual violence will begin to come out of the woodwork, sexual-assault advocate Vest told the Clackamas Print.

Asked to explain the missing footnotes from the mint-green flyer, Ginsburg said all the statistics came from the National Sexual Violence Resource Center but the college slapped its officials’ contact information over the footnotes from the NSVRC’s model flyer (below).

The deputy Title IX coordinator at first waved off the likelihood that the 1-in-5 statistic was not only wrong about community colleges in general but CCC in particular.

Informed that researcher Krebs, co-author of the 1-in-5 statistic, has said it’s not nationally representative and can’t be applied to any given campus, Ginsburg softened his stance.

He called it “the most reliable statistic, which probably also shows it needs more research,” and clarified that there’s much room for improvement and that concerns about presentation are valid. It’s only the second year that the college has attempted this effort, Ginsburg said. 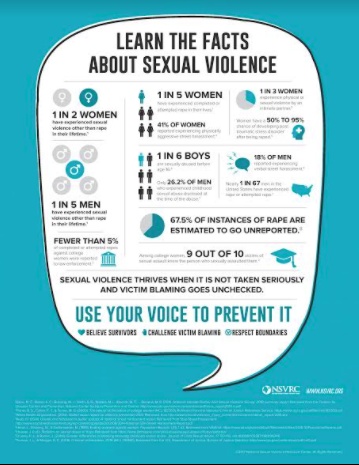 CORRECTION: The original article wrongly attributed the source of comments by Mary Vest, the college’s sexual-assault advocate. She was interviewed on video with school newspaper Clackamas Print. The article has been amended accordingly.

CORRECTION: The previous headline on this article implied that campus officials put forth the stats that 1 in 5 women will be raped on the actual campus. It has been amended to clarify that the suggestion was touted by students, and that they are referring to the oft-cited yet debunked statistic that 1 in 5 women will be raped or sexually assaulted during their four years of college.