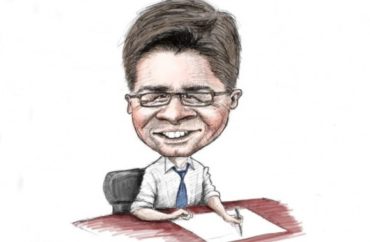 College Fix cartoonist Pat Cross has spent the past six years using his pen and paper to illustrate truths about American politics, and for the past three years, the reality of what happens on college campuses.

He has now chosen to take his talents to a definitively more noble vocation than journalism – entering St. Michael’s Abbey in California at the end of August to pursue priesthood with the Norbertines.

While he will give up his creative pursuits, his contemplation of the priesthood will continue his pursuit of the truth.

After much discernment and prayer, I have decided to enter St. Michael’s Abbey in Orange County California to begin religious formation. For this reason I will be retiring from political cartooning. I have not yet determined when I will publish my last cartoon. I officially enter the Abbey at the end of August. My last cartoon will be sometime between now and then. It is possible that I will return to cartooning in the future but, at least for now, I will be taking an indefinite leave of absence.

This decision was not easy. Cartooning has been a unique and wonderful way to communicate truth, but I have discerned that God may now be calling me to serve Him in a more particular way as a Catholic priest. As the great Calvin Coolidge once said, “The things of the spirit come first.”

The College Fix will miss our cartoonist and we are grateful for all of his work these past three years to use humor and art to communicate the insanity of college campus life each week.

Please pray for him and for the intercession of St. Genesius, patron saint of cartoonists.