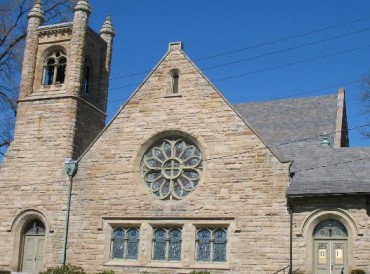 MEADVILLE – Allegheny College’s Ford Memorial Chapel was transformed into a boudoir of sorts Wednesday night, as professional sex educators advised students in attendance how best to touch themselves and their partners to reach orgasm in what was billed as an educational seminar.

The chapel, built and dedicated in 1902, is where Catholic mass and non-denominational services are conducted every week at the private liberal arts college in northwestern Pennsylvania. But all that took a back pew to Wednesday’s festivities, dubbed “I Heart the Female Orgasm” and hosted by a variety of student groups on campus.

“Sometimes it can be difficult finding your G spot by yourself, because it involves inserting a finger or fingers inside the vagina into the front wall of the body, and that kind of results in an awkward, kind of clawlike hand position,” Weinberg said, demonstrating with a pawing motion as the audience giggled. “Obviously, there are better ways you can position your body. Or if you’ve got a partner, you can get your partner to insert their finger or fingers inside your vagina in the front wall of your body in a sort of a J curve.”

Miller also weighed in, noting “some (women) find that if they change the angle or position, they can find some way of rubbing against their partner’s body, against the base of his penis or pubic bone, and with rubbing to have enough stimulation to orgasm in intercourse.”

In statements to The College Fix, the college’s chaplain defended the event’s location, calling its theme “responsible,” and a campus spokesperson said it offered a “great message.”

While the chapel is hosting services in conjunction with Lent, on Wednesday the building turned into a sexual marketplace of sorts, as student groups sold buttons, t-shirts and hats bearing the program’s name inside the chapel itself after the event concluded. They also sold the book written by program coordinators Marshall Miller and Dorian Solot titled “I Heart Female Orgasm: An Extraordinary Orgasm Guide.”

“So this primary anti-masturbation story is about this guy, Onan. … And Onan refused to sleep with his brother’s wife, so he spilled his seed on the ground — that’s how it’s defined — and for that, God struck him dead,” she said.

But Weinberg said she believes that because Biblical scholars debate the exact meanings of many portions of the Bible, it permits a wide variety of sexual activity.

During the event, Weinberg and Miller played the famous fake orgasm scene from “When Harry Met Sally” on a projected screen, and also displayed different anatomical diagrams depicting women’s genitals.

“If you’ve got a vagina, your genitals are tucked pretty neatly inside your body. It’s a pretty handy place to keep one’s genitals, really. But because of this, many heterosexual women have never seen another woman’s vagina or vulva,” Weinberg said. “If you’ve got cool dangly parts down there, if you’re voluptuous, if one side’s longer than the other, if your va-jay-jay’s got some character, some personality, it’s not a sign that you’re abnormal and deformed. It’s a sign that you’re a healthy adult woman.”

Weinberg later held up two books titled I’ll Show You Mine and Petals, encouraging students to flip through them after the program: “We’ve got two amazing books up here with pages and pages of art photographs of vaginas and vulvas.”

The event was hosted by Allegheny’s student government and Allegheny College’s Reproductive Health Coalition, along with Young Feminists and Queers and Allies. It was funded by student activities fees.

Student reaction to the seminar was mixed.

One Christian student, Shannon McAvinchey, 20, said the school’s student government supported Christian groups on campus and were not trying to intentionally offend Christian students by hosting the event in the chapel. At the same time, however, she said some students’ attitudes towards Christians troubled her.

“I guess what frustrates me most is when you say you’re a Christian, your views are automatically not so much disrespected as dismissed,” McAvinchey said.

Other students, however, were excited on their way to the chapel, chatting and laughing happily.

“I have needs!” one girl said.

“I have condoms! Jesus!” her friend shrieked.

Officials at the college took a blasé attitude toward the event.

Chaplain Jane Ellen Nickel, who conducts non-denominational Christian services each Sunday and manages the office of Spiritual and Religious Life, said in an email to The College Fix that she saw nothing wrong with the event, and hoped students would feel comfortable attending a religious service there later.

“I don’t have a problem with it being held in the chapel. The program advocates responsible, respectful decision-making regarding sexual behavior, and includes the option waiting for marriage, a message that resonates with many students of faith. While the name may have some shock value, the event itself is consistent with our policy of opening the building to campus groups. We would love it if students at such an event experience the chapel as a welcoming space, and then feel encouraged to attend a religious service or program.”

Another campus administrator told The College Fix he had no problem with the event’s location.

“They have a great message about caring relationships,” said Dean of Students Joe DiChristina in an e-mail. “I appreciated their approach.”

Fix contributor Katie McHugh is a student at Allegheny College.