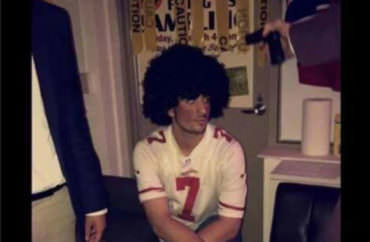 Not because it’s racist?

Dickinson College says it’s investigating a photo of an alleged student in a Halloween costume based on controversial and unaffiliated professional football player Colin Kaepernick.

Joyce Bylander, dean of student life, told the private Pennsylvania college community on Facebook Sunday night that she received the photo “this weekend” and it was “deeply offensive and reflected the exercise of very poor judgment.”

But she made clear that the white male’s imitation of an athlete with a white mother and black father was not the grounds for the investigation; rather, it was the appearance of a gun pointing at the alleged student:

We must all understand that this action, however distasteful, is a form of free expression. However, their speech does not mean that we must sit idly by and accept their message. …

We are investigating the gun in the photo. Guns – whether toys or real – are prohibited on this campus, and that issue will be addressed.

Bylander’s post didn’t specify how the school knew the white male in the photo and the arm of the person holding the gun were Dickinson students, nor any evidence the photo was taken on campus, the purported basis for the investigation.

A local progressive news site, Raging Chicken Press, traced the photo to an Instagram account that is no longer online as of Monday afternoon.

Commenters on Bylander’s Facebook post scold the college for an insufficiently militant response to an offensive image.

One person said the photo was “death threats” and “a threat to all people of color,” while another called both the photo and Bylander’s response “the definition of white privilege.” It’s a “direct threat to an actual living person,” yet another claimed.

A college spokesperson told PennLive that the school doesn’t believe the gun is real, but it is “encouraging continued, productive dialogue and facilitating a number of opportunities for the campus community to come together to discuss this matter.”

She gave no evidence the photo had anything to do with the Dickinson campus or student body.