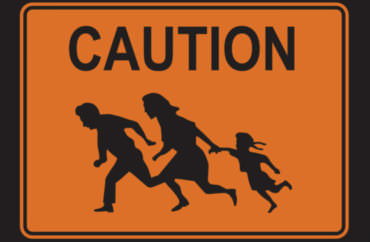 Fight against the ‘soul-sucking, lawless regime’

Universities are pulling out the stops to protect their students and employees who are in the country illegally, following the Trump administration’s decision Tuesday to rescind the Deferred Action for Childhood Arrivals program in six months.

College officials nationwide released statements protesting President Donald Trump’s request to Congress to legislate some form of protection for children brought to the U.S. illegally by their parents.

The Obama administration executive order creating DACA, which has temporarily shielded such young people from deportation, does not pass constitutional muster on its own, Attorney General Jeff Sessions said in a letter recommending its rescission.

Many college officials are hoping for congressional action and reiterating promises to protect and assist undocumented students, and others have stated unique positions.

While their condemnation of the move seems unanimous, the most aggressive statements are not coming from college executives.

One Dartmouth professor wrote on Facebook that “Cheetostiltskin & his evil cabal of gold making trolls and racist liars will be the ones who have to run away and never come back”:

Many of our [undocumented] students will try to stay under the radar as they travel. I am thinking of you all, and can provide any support you need during this time. Let’s crush this soul-sucking, lawless regime. 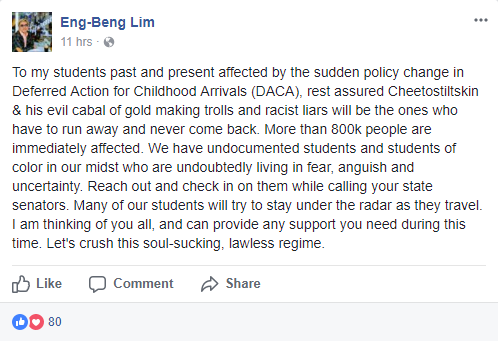 George Washington University, located just blocks from the White House, does not track DACA students, as it does not require applicants to provide proof of residency.

In the wake of Trump’s surprise election victory, the private university has provided special resources to DACA students on top of the mental health services it provides all students to confront their emotional challenges.

GWU spokesperson Maralee Csellar told The GW Hatchet that school officials will bring in outside immigration counsel to help students weigh the impact of Trump’s decision on their futures. The university will help undocumented and self-identified DACA recipients “as permitted by law and as requested,” she said.

President Thomas LeBlanc said he’s “confident” there are undocumented students on campus and that the planned Trump rescission was “not in the interest of GW,” while Provost Peter Konwerski retweeted a supportive tweet by the National Association of Student Personnel Administrators.

We join with others in the higher ed community in calling on Congress to codify #DACA swiftly. https://t.co/Q4ECiAd4HY

GWU Law Prof. Jonathan Turley, meanwhile, told The Washington Post that DACA never should have been implemented by executive order. In the announcement to end the immigration program, Sessions cited Turley’s testimony before the House Judiciary Committee about the “enormous constitutional infirmities raised by these policies.”

If DACA were challenged in court – Trump’s stated rationale for asking Congress to make the decision – supporters would have to explain how President Barack Obama had the authority to unilaterally implement the program while Trump by himself cannot revoke it, Turley said Tuesday.

Focusing on the work permits that DACA recipients could lose, American University President Sylvia Burwell said the private Washington school will help students find “replacement resources for the employment that is currently funding their studies.”

The secretary of health and human services when Obama rolled out DACA in 2012, Burwell also announced the campus will not become a so-called sanctuary:

While some presidents have declared their campuses as “sanctuaries,” we agree with the findings of many other universities and respected immigration attorneys that asserting such a status would have no basis in the law. The institution does not have the authority to exempt itself from federal immigration law.

In the meantime, UC will continue to offer services to our undocumented students, including: continuing to allow California residents who are Dreamers to pay in-state tuition; maintaining the DREAM loan program for financial aid; offering legal services to our undocumented students; supporting campus-based student service centers; and directing campus police not to contact, detain, question or arrest individuals based on suspected undocumented status, or to enter agreements to undertake joint efforts to make arrests for federal immigration law violations.

“This backward-thinking, far-reaching move threatens to separate families and derail the futures of some of this country’s brightest young minds,” Napolitano said, calling for immediate legislative amnesty “that charts a secure pathway toward citizenship” for DACA students.

DePaul University, the largest Catholic university in America, has boasted of its wide-ranging assistance to students who lack legal status.

President A. Gabriel Esteban said Tuesday its Undocumented Student Working Group “will continue seeking methods of support” for such students.

He reminded undocumented students of DePaul’s “extensive resources,” including information about scholarships and financial aid from its DREAM Resource guide. They can also contact the undocumented students’ liaison, get free on-campus legal services and external referrals, schedule one-on-one consultations with DePaul law alumni, visit the Asylum and Immigration Law Clinic, get support from both campus counseling and ministry offices, and find abundant resources at DePaul’s immigrant and DREAM web pages.

A major California State University campus released a sympathetic but realistic message to its DACA students.

The unilaterally enacted program is “widely acknowledged as a strategic benefit to our state and, indeed, our nation,” San Diego State University Chancellor Timothy White wrote.

But he warned DACA recipients that “CSU will be required to end the employment of some of its DACA recipients” starting in March if Congress doesn’t renew the protections.

The University of Pennsylvania, Trump’s alma mater and also private, declared itself a sanctuary last November, by which it meant it would only respond to lawful warrants from immigration enforcement officials.

President Amy Gutmann called Trump’s decision “heartbreaking” and tried to sway her famous alum by pointing to the alleged “loss of hundreds of thousands of jobs” and “hundreds of billions of dollars in economic growth” if the executive order is rescinded. Repeal and deportation will also cost “tens of billions,” she claimed.

Harvard University President Drew Faust condemned Trump’s decision as “cruel” in an email to the community, and promised to lobby hard “in Congress and elsewhere” for DACA’s continuation, The Harvard Crimson reported.

The approximately 65 undocumented students at Harvard already have their own full-time immigration attorney and Office for Equity, Diversity, and Inclusion representative, as well as a 24-hour hotline and weekly support group, all free of charge, according to the Crimson.

MORE: Illegal students whine about California’s ‘lack of commitment’ to them

The University of Indiana-Bloomington pointed to its DACA @ IU website, saying it “can and will take several steps to continue supporting all IU students … that are within the bounds of the federal and state laws that bind us as a public institution.” Its statement said it will seek answers to the “many questions” raised by Trump’s Tuesday statement.

The public university said that though it appreciates House Speaker Paul Ryan and other supporters of DACA who are seeking a congressional fix, it is “deeply disappointed” in Trump’s decision following his “prior statements expressing support for young people protected by DACA.”

Ohio State University President Michael Drake simply noted his university’s support for its DACA students and letter to the state’s congressional delegation “urging them to take swift action to find a bipartisan solution that will, at a minimum, codify the existing DACA policy into law.”

He added: “‘Education for Citizenship’ is our motto, regardless of nation of origin.”

We urge Congress to act immediately and allow #DACA students to continue their pursuit of the American Dream. pic.twitter.com/oAKOzSRCI4

The University of Illinois System released a unified message in solidarity with the DACA students on the three campuses. While it will adhere to all laws, “our values as a land-grant institution compel us to speak out when government action puts members of our communities at risk.”

The UI system said the elimination of an executive order that faced a legal challenge from several states “is inconsistent with our commitment to accessible and high-quality education for all qualified and deserving students.”

Following scores of denunciations Tuesday, Trump tweeted that if Congress doesn’t find a legal fix for DACA in six months – “something the Obama Administration was unable to do” – he will “revisit this issue!”

Congress now has 6 months to legalize DACA (something the Obama Administration was unable to do). If they can't, I will revisit this issue!