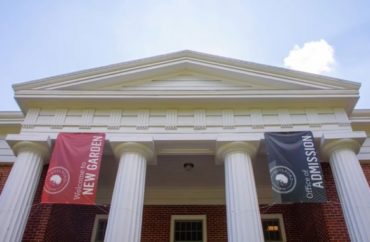 Guilford College President Carol Moore has offered a plan that would cut majors in areas such as chemistry, physics, political science and economics, while retaining majors in social sciences like gender and sexuality studies and African and African American Studies, according to a statement released by the school last Friday.

The plan, which has been submitted to the school’s board of trustees, will include 15 tenured professors being let go from the school, as well as five other faculty members. Moore said the cuts are necessary to close a $7 million budget gap, but it has led to a backlash by students and alumni.

Moore told The College Fix that the cuts were necessary due to 12 years of declining enrollment and because COVID “strained already strained budgets.”

“There are so many small private colleges that don’t have the large resources in reserve that larger institutions do,” said Moore on a Zoom call Wednesday with The College Fix. She said the school underwent a process to determine “which programs were perhaps not as popular any longer” and to “make adjustments to make room for investments in new programs.”

But at the “Save Guilford College” Facebook group, efforts are being made to reverse the school’s budget cuts. Students and alumni have also penned an open letter to Moore urging her to reconsider her proposed elimination of majors.

“The draconian cuts that are currently being considered threaten to destroy the very identity of the school we love,” write the signatories. “We fear that this new ‘version’ of Guilford will be so academically impoverished that it will have lost its credibility as a true liberal arts institution, and it will fail to attract the necessary number of students to even sustain the debt that recent administrations have incurred.”

Moore said next week she will be having a Zoom meeting with a small group of the Facebook group’s members, saying there’s a lot of “emotionality” involved in their objections.

Moore said she applauds the efforts of those in the Facebook room to raise money to offset the cuts, but she noted the $7 million hole is a structural budget deficit that would need to be filled every year going forward.

She said the school would “graciously accept” any money raised, but an ongoing private fundraising effort would not be “feasible” going forward.

Guilford College is a small, private school in Greensboro, North Carolina, founded by the Quakers in 1837. It enrolls just over 2,000 students.

Thom Espinola, chairman of the Guilford Physics Department, said he was “perplexed” by the school’s decision to cut physics as a major, adding that a cost-benefit study he commissioned demonstrated that “laying down” the department would actually cost the school more money.

“This plan does not reflect on the school’s philosophy in any way,” Espinola told The Fix.

“Historically, Guilford has maintained a peaceful balance among science, arts, humanities, and social science as is appropriate for both a Quaker school and a liberal arts institution. If this plan represents any philosophy or vision, it must be the president’s,” Espinola said.

Moore rejected the idea that keeping Women’s, Gender, and Sexuality Studies and African and African American Studies at the expense of physics, chemistry, and other sciences reflected a change in philosophy for the school. She noted that the former majors are “interdisciplinary majors,” meaning there are no dedicated faculty assigned to those programs.

“The students that wish to follow those paths take a smattering of courses from multiple different disciplines and departments, so therefore there’s not a defined associated cost with that,” she said.

Small private schools around the nation were struggling with how to retain revenues even before COVID-19 began shutting down campuses and online instruction began to grow. At the University of Tulsa, for instance, the school axed a number of its social science and liberal arts programs in favor of science and technology majors, believing those programs helped students increase their chances of employment post-graduation.

“I love Guilford College, and when you love an institution, you’re not afraid to tell it when it’s making a mistake,” writes history major Bryan Dooley in the Save Guilford College Facebook group. “There has to be a better option, because this isn’t the way to go,” writes Dooley.

The board of trustees will meet in February to review individual appeals for professors.