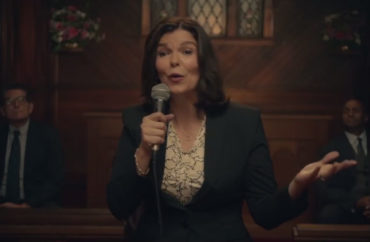 WASHINGTON – There’s a period in 21st-century America when everyone but five Supreme Court justices seemed to be united in outrage.

Four liberals and Anthony Kennedy had just declared that private property is functionally meaningless unless you’re rich and well-connected, granting the authority to every municipality in America to kick blue-collar folks off their land in the name of “economic development.”

The nationwide backlash to that odious decision spurred a grassroots movement to rein in the gross excesses of eminent domain, and dozens of state legislatures took up the call.

A new film by the makers of Can We Take a Joke? dramatizes the lengthy fight between homeowner Susette Kelo and New London, Connecticut, which sought to evict her from her “little pink house” so Pfizer could build out a campus and the city could redevelop the blue-collar waterfront, expand tax revenue and make it “hip.” (Pfizer was about to introduce Viagra.)

Little Pink House stars Catherine Keener (The 40-Year-Old Virgin, Get Out) as the steely yet reluctant Kelo. It debuts this weekend in select cities, and you can even request a screening for your own community.

What relevance does this have to our work at The College Fix, you ask? None, I thought, when I went to a screening Tuesday at the Cato Institute (which featured Kelo herself) and didn’t bother bringing a notepad.

Little did I realize that co-star Jeanne Tripplehorn’s performance as Kelo’s primary female antagonist – a college president! – would expose the hollowness of “social justice.”

MORE: Can We Take a Joke? challenges students to be open-minded

It’s worth recalling who was chosen to be the public face of this morally bankrupt campaign to kick a twice-divorced paramedic out of her house for the benefit of a pharmaceutical giant.

Connecticut College President Claire Gaudiani was remade into Tripplehorn’s Charlotte Wells of “Walthrop College,” and the veteran actress (Big Love, Basic Instinct) oozes the self-righteous moralizing of the most stereotypical college president you can imagine.

She’s picked to lead the private New London Development Corp. because she combines showy learning (with frequent and annoying lapses into French) with the zealotry of the social justice warrior.

Tripplehorn’s Wells (below) reminded me of Debora Spar, Barnard College’s longtime president, who left the women’s liberal arts school with both a long list of accomplishments and the visceral loathing of many students who decried her “white feminism.” 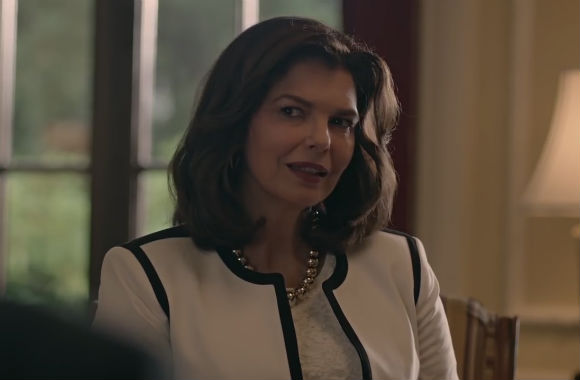 It’s up to Wells to convince the supposedly simple folk of New London that economic development will not only make their town a ritzier place (where, of course, they can’t afford to stay), but that it will make poverty history.

She invokes “social justice” before skeptical crowds like a Pharisee praying in public for making him so much better than the tax collector. She claims that this unholy alliance between Pfizer and elected officials will bring jobs and prosperity to the lowest rungs of society.

She refuses to empathize with working-class people who don’t appreciate her grand offer to buy their homes and transform their neighborhood into a place where they would never be welcome, as Keener’s Kelo tells Wells at a community forum. After all, it will help poor people!

The portrayal was not an exaggeration

I thought Tripplehorn’s portrayal of this sloganeering Francophile was a bit heavy until I visited Claire Gaudiani’s website, which erased all doubts.

Currently an adjunct professor of philanthropy at NYU, Gaudiani calls herself an “engaged civic leader who speaks widely about the synergy of capitalism and philanthropy, encouraging fundraisers, financial advisors, corporate leaders, and politicians to harness America’s tradition of moral entrepreneurship to solve today’s problems of poverty and inequality.” (By kicking working-class people out of their homes for Big Business.)

I recommend watching this short clip of her addressing the Community Investment Network Conference, but only on an empty stomach. (Here are the videos she personally recommends.)

She also served from 1997 to 2001 as volunteer president of the New London Development Corporation, dedicated to building the tax base, creating jobs and improving the quality of life for all citizens of New London,CT. During her tenure, NLDC managed $75 million in state infrastructure funding and attracted $300 million in private investment to New London.

This leaves out the inconvenient fact, highlighted by George Will in The Washington Post, that Pfizer simply blew through its government subsidies and skipped town, “leaving a vacant lot where the pink house once stood.”

Will notes Tripplehorn’s crusading college president “is fluent in the pitter-patter of crony capitalism”:

The NLDC will make New London “vital and hip” using a public-private “collaboration” wherein uprooted homeowners will be “part of our team” because “social justice and economic development go hand in hand” as the NLDC integrates “the infrastructure of large corporations to the brass-tacks needs of our city’s most . . .” [sic]

Gaudiani’s description of her college presidency heavily relies on this alliance between economic development and social justice, pointing to the “quintupling” of Connecticut College’s endowment, new buildings and 13 percent jump in minority enrollments.

And yet Gaudiani’s perspective has only gotten more influential with the rise of supposedly socially conscious companies, which couch their naked self-interest in the language of social justice.

I would be curious to hear how socially-minded college students perceived Tripplehorn’s performance: Do they see Charlotte Wells as a faker who steals their language to take from the 99 percent? Do they agree with her stealing from mildly privileged homeowners to indirectly enrich their jobless neighbors?

Most importantly, do they see how the language of social justice can be twisted to fit any agenda?

After all, it was another college president who justified firing a professor for defending a blacks-only Black Lives Matter rally by saying she had created an unsafe space on campus!

I hope Little Pink House has a long and profitable box-office run and further earnings on television (one network executive pitched the idea at the Cato screening).

But it will have its longest-lasting impact if it teaches young people to recognize how their most cherished concepts can be inverted and used against them by silver-tongued elites.

MORE: When ‘safe space’ is used against social justice warriors