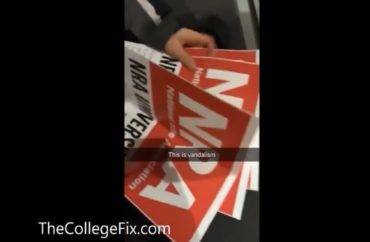 NRA slams ‘out of control vandals’; school is investigating

Conservative students at the University of Wisconsin at Stevens-Point were the victims of vandalism and a public shaming campaign recently, with the leader of the school’s College Republicans stating the group has been twice “silenced” by acts of property destruction and that group members were smeared as “racists” in a social media post.

Amelia Heup, chair of the College Republicans at that school, told The College Fix that the school has not yet taken any action against the vandals, while the university said it is “investigating” the matter.

The controversy began after members of the College Republicans posted fliers advertising an NRA event on the university’s campus. Within twelve hours, Heup said, “every single poster was removed.” Subsequent fliers were also removed. “We have had to repost over 40 posters,” Heup told The Fix.

Video obtained by The College Fix shows an individual pulling multiple multiple posters from the garbage advertising the NRA event.

Reached for comment, campus spokesman Nick Schultz said that campus officials had met with members from the College Republicans and that “the dean of students is investigating the matter.”

“UW-Stevens Point values diversity and freedom of expression for all. It is remains committed to a learning environment that respects multiple viewpoints and ensures discourse is civil and fosters personal responsibility,” Schulz added.

In addition to the vandalism of their flyers, Heup said that College Republicans were also targeted by a former student and former employee of the university, who called the group members “racists” while uploading all of their names to a Facebook post.

Erwin Palma, whose Facebook page identifies him as a former front desk attendant and lab technician at the university, recently posted the names of the group members, stating in the post that the university “has its own way to easily identify the racists at school.” Screenshots of the post obtained by The Fix show that a little over a hundred names were posted, including Heup’s.

Heup said that the posts are an example of “defaming a group on campus to silence them.”

“The UWSP College Republicans recognize that Mr. Palma has the same free speech rights. However, defaming a group of people in the manner is wrong,” she said.

Asked about Palma’s Facebook post, Schultz told The Fix that since “the person who posted it is not a UWSP student, nor an employee, campus administrators cannot pursue a student conduct process.”

Referring to the poster vandalism, Heup said that the university “should take steps to ensure that all voices are heard on campus.”

“This includes using the resources like campus security and IT to protect students who use campus resources like poster boards and other ways of communication,” she said.

“In dealing with the Facebook post, Mr. Palma’s interaction and involvement with the University should be re-evaluated. This action against students does not provide an environment for students to express and learn new ideas,” she added.

In spite of their disagreements regarding campus policy, Heup said the College Republicans maintain a “diplomatic” relationship with the administration. “Overall, the administration has been well to work with, besides the occasional bias[ed] professor,” she said.

When asked for comment, NRA spokeswoman Catherine Mortensen said that the gun rights organization is “alarmed by this growing trend to stifle free speech on college campuses.”

“Freedom of speech is the right of every American. Out of control vandals on college campuses ought to be prosecuted to the full extent of the law,” she added.