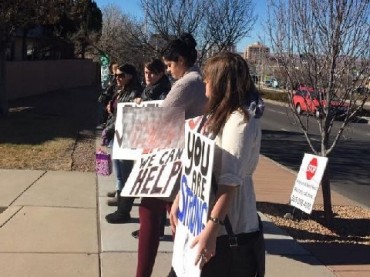 Students for Life at University of New Mexico tried to intervene, to no avail

It was a typical night in early January. I was feeding my newborn son and spending time with my husband and his parents. Next thing I knew, my phone rang, and my night took a drastic turn.

As a new mother and college student at the University of New Mexico, where I serve as vice president of its Students for Life chapter, things rarely slow down.

And so I found myself learning of a 20-year-old college student who had traveled with her father from England to New Mexico to abort her 30-week-old baby, which still had ten more weeks to grow in the womb. In England, late-term abortions at this stage are illegal. In New Mexico, the state lacks a single restriction regarding abortion.

At 30 weeks, the baby’s lungs and digestive system are nearly complete. It can open and close its eyes, which have eyebrows and eyelashes, and even tell light from dark from within the womb. The baby will continue to gain weight until birth, but at this point he or she is almost fully developed.

With that, the pregnant woman’s mother had frantically reached out through UK Priests for Life. In turn, its members sent an urgent message to pro-life activists in New Mexico. That’s where the Albuquerque-based Project Defending Life came in. Samantha Serrano, its director, called me and other members of Students for Life in an attempt to approach the family together and discuss other options, such as financial support or adoption.

Serrano told me she believed my current situation as a 21-year-old college student with a newborn baby might reach this young, British college student. I was asked to contact the mother-to-be – with the phone number provided by her own mother – and share my story, encourage her and give her support. She, like me, has one more year left in college.

I reached out to her several times with long, encouraging, and peaceful text messages, until I was finally blocked.

Our second attempt was to peacefully approach her hotel the day of her abortion for a peaceful conversation. However, upon arrival, we were repeatedly threatened by her father, who refused to let us see his daughter, and eventually called the police. We left.

The final stand was outside the Southwestern Women’s Options clinic. Five Students for Life members, as well as nearly thirty other local pro-life advocates, waited for the young woman to arrive. Many of us have trained with Sidewalk Advocates, a ministry that equips us to speak peacefully and tactfully to families entering abortion clinics.

Members stood outside the clinic and prayed for the family, grasping at the small amount of hope they held that this young woman would choose life. To abort a baby of that age, a lethal dose of the heart medication Digoxin is injected into their heart or into the amniotic fluid directly through the woman’s abdomen, giving the baby a fatal heart attack. Then a drug is given to the mother to induce her to expel the deceased baby. The procedure cost this family $12,000.

We eventually learned that this young woman had decided to abort her 30-week-old baby that day, and as all hope left the community, so did many among the large crowd gathered at the clinic.

Members of Students for Life stayed through the evening hoping to talk to the family after the abortion to offer them healing, love and support; however the family stayed overnight in the clinic, and avoided any confrontation. Eventually, they went home.

The battle to save this woman from a life of regret and her unborn child from a painful death has been lost, but the fight continues on for Students for

Life at the University of New Mexico. This experience has made it apparent that the pro-life community is steadily growing, but that the need for a positive influence is necessary more now than ever in Albuquerque, commonly known as the late-term abortion capital of America.

College Fix contributor Sade Patterson, pictured, is a student at the University of New Mexico and vice president of its Students for Life chapter.