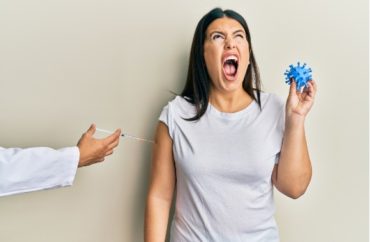 “In 1736 I lost one of my Sons, a fine Boy of 4 Years old, taken by the Small Pox in the common way,” Benjamin Franklin said following the death of his son, Francis Folger Franklin.

“I long regretted that I had not given it to him by Inoculation, which I mention for the Sake of Parents, who omit that Operation on the Supposition that they should never forgive themselves if a Child died under it; my Example showing that the Regret may be the same either way, and that therefore the safer should be chosen,” Franklin wrote in his autobiography.

Even in 1736, Franklin understood how vaccines worked: note he bemoaned the fact he had “not given” his son smallpox “by inoculation.” Colonial medicine recognized that by giving a patient a small dose of an infection, it allows the body to build antibodies to help the patient fight off the infection in the future. (The Chinese understood this as early as the year 1000.)

Currently, the debate rages as to whether schools should mandate students get vaccinated for COVID-19, so they may go off into the world infection-free. But the whole concept of inoculation – curing students by giving them a dose of something harmful – transfers into other areas of their lives. Most notably, their ability to cope with and tolerate dissent.

Throughout history, students have been sent to college to have their views and ideals challenged – the grown-ups in academia understood that, like creating a diamond, creating a well-rounded person required pressure. They were supposed to encounter people unlike them and round into maturity by learning how to bolster their own ideals in the face of competing viewpoints.

But students now show up on campus expecting something entirely different from administrators. Now, high school students come to college campuses expecting to be coddled and to have their viewpoints buttressed through official actions by the school. Oftentimes, these actions include silencing those – almost always conservative – voices with which they disagree.

The primary reason this is happening is because schools no longer see kids as students; instead, they see them as consumers who will take their business elsewhere if their demands are not met. With tuition skyrocketing, schools need bodies in their seats – and those bodies are now more likely to leave if they feel at all uncomfortable. And they take their tuition money with them.

So instead, schools hire more “diversity” staff to show they are doing something. They cancel campus speakers who students deem unworthy of the university and fire professors who veer the slightest bit from progressive orthodoxy. They create “bias response teams” to teach students that if they hear something uncomfortable – in a private conversation or otherwise – someone can be made to pay.

The effect of the “customer is always right” sentiment on campus is that schools are now sending students off into the world who have never had their ideals challenged. In an academic sense, they are “unvaccinated” – they have never built up the intellectual antibodies needed to function in a world that doesn’t give their feelings preference over all else.

In their book “The Coddling of the American Mind: How Good Intentions and Bad Ideas Are Setting Up a Generation for Failure,” Greg Lukianoff and Jonathan Haidt compare this phenomenon to peanut allergies in school.

As they note, in the mid-1990s, peanut allergies were rare in elementary schools – but by 2008 the number of children with peanut allergies had tripled, primarily because parents had begun protecting their children from peanuts in the 1990s. In one study, 17 percent of children whose parents had “protected” them from peanuts had developed allergies, while only three percent of the students who hadn’t been protected developed an allergy.

In other words, your body, like your mind, learns to protect itself so it can function normally and properly.

But on campus, where “trigger warnings” and “microaggressions” are rampant (and studies have shown neither are effective in ameliorating students’ neuroses), minds cannot learn to protect themselves. They go off into the world demanding their workplaces cater to their every demand as their college did (and many workplaces comply.)

Vaccinations, whether they be for smallpox or COVID, are unpleasant, but necessary. Just as necessary is mental inoculation, where students build immunity to a world that will often be unkind.

To do otherwise is to leave our kids sick and vulnerable.