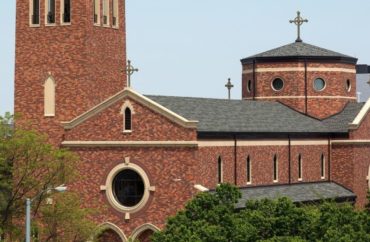 ‘A home away from home,’ said two alumni

Even to non-Catholics, Newman’s name probably sounds familiar — it’s who the Newman Centers are named for at public and private colleges across the country.

The College Fix talked to a handful of people involved with Newman Centers, including current students, graduates and a priest that runs a popular one on his campus. There are almost 1,500 centers across the country, according to the Newman Connection.

A common theme included the sense of community that the centers provided for Catholics. Several also talked about the role the centers played in bringing more people to the Catholic faith.

It’s a good legacy, since Newman himself was a well-learned intellectual and theologian, and converted to Catholicism at the age of 44, according to Catholic.org.

He wrote 90 theological tracts and gave a series of lectures on theology. Pope Francis declared him a saint on October 13, 2019, just one year ago.

Father Francis Gavin, who is a priest at the same Catholic community and church that Newman established, told BBC last year that the saint “is very well known in the Church as a theologian, a teacher and an educationalist.”

“But he was also a priest and a pastor. He visited the sick, the imprisoned, and those human qualities of care and friendship are as relevant now as they were in his own time,” Gavin said.

This legacy of scholarship, service and community live on today in Newman Centers across the country.

A priest The Fix spoke to said that his center provides a place for students to explore deep questions and topics.

“We provide a space within a secular campus for students to find answers to their deepest questions,” Robert Lampitt (below), the priest in charge of the University of Illinois at Urbana-Champaign’s center told The Fix via email. “We desire to help them build a lifelong relationship with Christ and his Church. This occurs through social, intellectual, and spiritual exercises.”

Fr. Lampitt said that regular activities at the center include daily Mass, student-led retreats and service opportunities. He said that before coronavirus, 1,000 students regularly attended Mass. 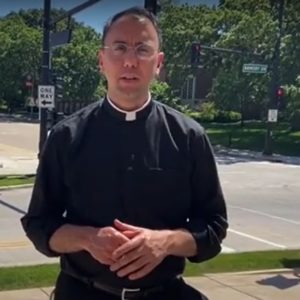 In the past 40 years, he estimated at least 105 students have entered religious life, but that the center continues to work on the project.

It contains not only a place for Mass and fellowship, but also a dormitory for Catholic students to live.

For students away from home for the first time, Newman Centers can provide a place for them to grow in their faith and find a home.

Bryan Istenes (below, with a friend), the former co-president of his Newman Center at Baldwin Wallace University, said that at least one girl became Catholic while she was at school, despite objections from her mother. It also helped him is in his faith.

“It definitely helped me grow my faith more, just having that community of Catholic friends,” Istenes told The Fix in a phone interview.

Istenes, who graduated in 2019 and also led his school’s Students for Life group, said it was his “home away from home.” 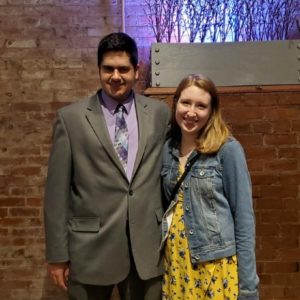 “We actually had weekly small groups and would cook a meal for whoever showed up,” Istenes said, taking advantage of the fact their meeting place was in a house.

The students also cooked meals as a service project, regularly taking meals to a local pro-life maternity home where pregnant and parenting women can live.

Istenes said the opportunities available for students included Sunday Mass, small group discussions and presentations by local groups and students on a variety of topics. One semester the students studied Theology of the Body, a series of lectures from St. John Paul II on human sexuality.

Forty students regularly attended Sunday Mass and over 100 students attended Ash Wednesday Mass, according to Istenes. Fifteen or so students would attend one of the small groups regularly offered by the Newman Center.

Brought students and community together

Mass attendance at another Newman Center served not only as a way for Catholic students to grow in their faith, but as a way for students and community members to interact.

Dillon Domke (below), a 2016 graduate of Northern Illinois University, lectored at the Newman Center and echoed Istenes’ comments.

Sunday Mass regularly had a few hundred attendees, Domke told The Fix via phone interview. The NIU Newman Center acted as a parish in the community and included a blend of students and DeKalb community members.

He told The Fix why he enjoyed his experience:

It surrounds you with like-minded people, it’s a home away from home. I pretty much went home just for Christmas and Thanksgiving, so it really felt like a home. I liked the aspect of it also being people’s regular parish. It really did make it feel like a home. Because there were people who had been parishioners there for twenty years. Living in a college town, most people love the interactions with the students and they were always hosting different events, they’d cook a meal for finals, for example.

Students and community members would engage in service projects together, such as volunteering at soup kitchens. 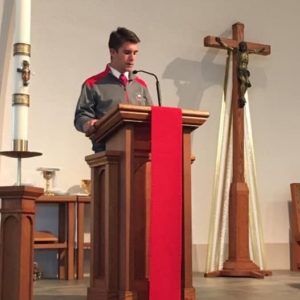 Students could take courses through the Newman Center that counted for academic credit.

They also could study together at the center, which included a mixture of studying for classes and learning about Catholicism, Domke said.

“The coolest part is that it had a really strong community behind it.”

Lara (below), a junior student who now attends the Catholic university Benedictine College in Kansas, told The Fix via Instagram messaging that she “did not want to indulge into today’s modern college culture” of partying.

“My sophomore year of college I was far away from God,” Lara said, and “was just healing from a traumatic breakup, hung out with the wrong people, and felt alone in a university that had over 30,000 students.”

Thankfully, she was familiar with the Newman Center, which was located across the street from her freshmen dorm.

She said she found out about the Newman Center’s activities from her school’s Students for Life group.

“Joining the Newman community has been a fulfilling part of my faith because it helped me not only grow in my faith but in pro-life ministry as well,” she said.

Editor’s note: The original participation numbers for Baldwin Wallace Sunday Mass and small groups were misstated and have been updated.