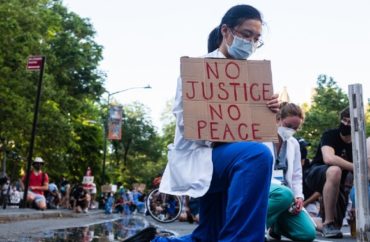 Students will learn how to address ‘white privilege,’ too

A medical school professor, who is also the diversity director, said that the murder of George Floyd in Minnesota has made the situation worse at the New York institution.

Professor Jean Alves-Bradford said in a news release that “it’s been very difficult for students in general, but especially for students underrepresented in medicine.”

The College Fix reached out to several members of the media relations team at the medical school, but did not receive a response to several emails sent in the past three weeks. The Fix asked how the medical school decides which students are underrepresented, if there were groups of students that asked for the workshops and what benefits they believe the workshops would have for students.

“The workshops assess trainees’ experiences of microaggressions and racial trauma and teach therapeutic and coping skills,” the university’s announcement said.

“The students learn about existing systems of privilege and oppression, share experiences of being confronted with racism, practice microaggression response strategies to disrupt racism, and learn resilience strategies to cope with racialized trauma.”

‘Liberal racism’ is a problem at the Ivy League school

One former medical school professor is doubtful that the university can ever confront its “liberal racism.”

Cardiologist Ray Givens, who recently took a job at Emory University, said that the microaggression training could help, but he “would want to have a sense of the effectiveness of an intervention like this.”

He did not help develop the curriculum.

He said these workshops and similar initiatives will have a “modest impact” at best in addressing racism.

“My battles with Columbia and with the medical field that have been profiled in The College Fix over the past year illustrate the stubbornness of liberal racism,” Givens said.

“Columbia’s president, Lee Bollinger, is perhaps the prominent advocate for diversity in higher education, who has burnished his reputation on his role in helping to preserve affirmative action in admissions (see Supreme Court case Grutter v. Bollinger, 2003),” Givens said.

Despite this reputation, the cardiologist has found himself “in a lonely battle” with the Ivy League president.

He said Bollinger “has resisted being truthful about the renaming of a building honoring a slave owner on the medical center campus, and liberal media have lined up to suppress the story.”

“I played a role in the resignation of the editor-in-chief of the Journal of the American Medical Association over a podcast about structural racism,” Givens noted. “In every instance, the response from the power holders has been hostile, resistant and deceitful.”

He said that “initiatives like addressing microaggressions, implicit bias training, diversity and equity training, and other gradualist approaches give the impression of change while largely helping to maintain the status quo.”

He called the problem of structural racism in medicine “urgent” and wants to see more movement on the issue among his medical peers.

“The problem is gigantic, and all of the talk about critical race theory or whatever else is just a distraction from the emergency at hand. As for what I would do about it — broadly, I think we need a medical civil rights movement,” the Emory professor told The Fix.