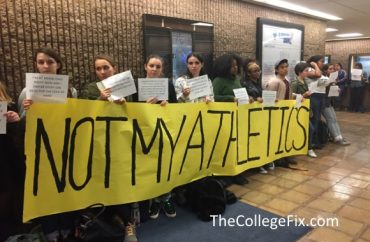 Vulgar texts among the members of Columbia University’s wrestling team that use the n-word and refer to female students as ugly and begging for sex have prompted the team’s suspension and calls for the student-athletes’ expulsion.

On Monday, students at the Ivy League university took part in a protest to demand the wrestlers’ removal from the wrestling team (pictured), not going as far as a student petition that calls for them to be expelled from campus.

More recently, the wrestlers who sent the texts have had their names and faces published on social media circles among Columbia students, prompting some students to send rude and angry messages to the athletes’ family members.

The controversy, which has engulfed the school, began Nov. 10 after Bwog, an independent student-run news website at Columbia, received screenshots of Class of 2017 Wrestling Team group chats.

The screenshots involved messages from 2014 to just last week on GroupMe, a mobile group messaging app. In the private messages, the male wrestlers make derogatory comments about women, gays and African-Americans. “One of the men said a female student looked like ‘a dude in a wig.’ Another woman was referred to as ‘fish pussy,'” Bwog reports. “The wrestlers in the GroupMe also mocked female students as a whole. In one message, a wrestler refers to female Columbia students as ‘ugly socially awkward cunts’ who feel ‘entitled…’ Another member of the team expressed frustration over how their team would ‘run the town of any state school’ where ‘every girl begs for the cock so hard.’”

Another message states, “I know everyone’s asleep but 2 black girls just sandwiched me on either side during this review. If I don’t make it out tell my kids I love Em and merry chirma.”

After these messages leaked, a petition calling for the expulsion of the members of the wrestling team who were involved with these messages circulated online.

In response to claims that expulsion may be a disproportionate reaction, the petition states: “This defense is irreconcilable with the supposedly fundamental expectation that makes the residential college experience possible: that Columbia students behave as though we belong to a shared community by regarding one another as equally deserving of respect, dignity, and humanity. The members of the Columbia wrestling team’s Class of 2017 have openly and proudly failed to uphold this expectation.”

According to the petition, keeping the wrestlers who sent these messages on campus would be a statement that the “material lives and psychological well-being of marginalized students means nothing to the University.” It calls for these “violent individuals” to be placed far away from the Columbia community.

The petition received more than 900 signatures as of Nov. 14. On social media, one student at Columbia stated that the wrestlers’ family members have received “awful” notes with statements like “Your racist family is absolutely disgusting. I hope your brother is locked up. You don’t deserve to live here.’”

Another student at Columbia who wishes to remain anonymous because of privacy concerns tells The College Fix that he saw a student bragging on Facebook about sending the GroupMe messages to the parents and sisters of the wrestlers and adding, “This is the kind of person you raised.”

Some of the organizers of Monday’s protest stated on Facebook that it’s fine to forward screenshots of the wrestlers’ texts to their families — but that “sending awful messages to their parents and sisters” should be off limits.

A Columbia spokesperson did not respond to The College Fix’s request for comment. In a statement to Bwog given right after the screenshots were published, campus officials state:

Columbia University has zero tolerance in its athletics programs for the group messaging and texts sent by several members of the men’s varsity wrestling team. They are appalling, at odds with the core values of the University, violate team guidelines, and have no place in our community.

On Monday, campus officials updated that statement, suspending the wrestling team’s season, noting that “Columbia wrestlers will not compete until we have a full understanding of the facts on which to base the official response to this disturbing matter.”

Also on Monday, protesters held signs with the text of the wrestlers’ messages as they silently flanked the walls of the Dodge Fitness Center.

Protesters demanded that when hate speech by an athlete is made public, campus leaders should remove them from the team, strip them of any and all awards, and have the athlete issue a public apology.

Protesters have also mandated that a percentage of any future donations to the Columbia Wrestling Team be redirected to the Office of Multicultural Affairs and Sexual Violence Response of Columbia Health to recognize “the toll” that the GroupMe messages have taken on the community and more specifically “the women, LBGTQ+, students of color, and women of color… on this campus.”

Protesters have also called on the wrestlers’ names to be publicly released, in addition to the fact that their identities have already been posted on social media. That has prompted some privacy concerns among students.

“I was immediately struck by the unabashed disavowal of privacy from both the Bwog article and the following reactions from the Columbia community. There was no discussion of whether or not it was justified to publish private screenshots of a conversation that individuals assumed they were having privately,” Columbia sophomore Victoria Gross tells The College Fix.

She said the contents of the GroupMe were “hateful and disappointing messages.” Nevertheless, she adds, “I find it weak to use these hateful messages as some sort of litmus test as to whether or not the Columbia community, or specifically men’s athletics, amounts to a ‘culture of intolerance.’ If anything, the aghast reaction has proved otherwise.”