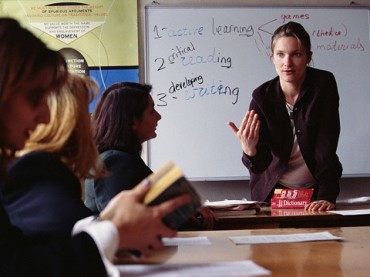 Even as several state leaders repeal their acceptance of the controversial “Common Core” federal standards for K-12 schools, the curriculum’s proponents are pushing for it to be used in college admissions.

“We don’t want this effort to stop at the college door,” Lindsey Tepe, an education policy program associate at the New America Foundation, told Real Clear Policy, adding that the Common Core standards were “developed with the idea that they are college- and career-readiness standards.”

“If states have made a commitment to college- and career-readiness standards and assessments,” Tepe said, “it seems very silly that they would not also then say that if you meet your state’s standard, that should then qualify as a minimum admissions standard to the lowest tier of four-year universities in that state.”

Tepe speaks on behalf of the New America Foundation, described as “one of the most prosperous and influential think tanks in Barack Obama’s Washington,” with financial backers that include the Soros family and the Bill and Melinda Gates Foundation. In recent months, Bill Gates has been increasingly credited with spearheading Common Core’s creation and implementation.

But while big names back the push for these embattled federal standards, not everyone’s convinced Common Core assessments should be used for college admissions.

“The central problem with using Common Core as the standard for immediate, non-remedial entrance into all colleges is that it is a low standard fit, not for all college admissions, but for two-year community colleges,” Joy Pullmann, a research fellow at the Heartland Institute and managing editor of School Reform News, told The College Fix.

Among Tepe’s recommendations, she suggests Common Core assessments might eliminate the need for ACT and SAT college-entrance exams.

While she stops short of saying the ACT or SAT should be axed, the comments come as Common Core assessments are expected to be rolled out this school year, according to the official Common Core government website.

“(Two consortia) … are currently working to develop assessments that aim to provide meaningful feedback to ensure that students are progressing toward attaining the necessary skills to succeed in college, career, and life,” the website states. “These assessments are expected to be available in the 2014-2015 school year. Most states have chosen to participate in one of the two consortia.”

But Pullmann said neither choice is a good one.

Colleges and universities will “further water down the quality of their curriculum, require students to spend more time in college, or both,” she said. “Whatever they choose, it’s students and society who end up further cheated by our mediocre-quality American education system,” she added.

Pullmann said she disapproves of how almost every state university has signed assurances that they would admit Common Core graduates – “even though … Common Core does not send students through calculus, which is the bare minimum in math a high school student must take to be truly ready for a four-year STEM major.”

Pullmann said she believes math and science professors will not approve of being forced to work with “even less-prepared high school graduates.”

Pullmann also argued that graduation from high school should not result in a one-way ticket to college. Historically, she said, students must demonstrate high academic performance beyond just a high school diploma to get into college.

College has traditionally been for the “nerdy types,” Pullmann said – “not previously regarded as a seamless part of one’s basic academics, something everyone should do.”

Pullmann even goes as far as to suggest Common Core advocates such as Tepe essentially mislead people regarding the common core college-entrance topic.

“People who promote Common Core use the word ‘college’ to mean any college,” she said. “There are many, many colleges in this country where anyone who breathes can get in and get taxpayer funding.”

After speaking with a community college professor, Pullmann said she learned that the average student is “barely literate” and “can barely do multiplication.” She said it is unfair to require both types of institutions – community colleges and four-year universities – to use the same entrance requirements and admissions standards.

“As I understand it, there will be no independent review of these tests, so it will be very difficult to independently judge whether these famous-before-they’re-born tests actually live up to all the pre-release hype,” she said.

But in her interview with Real Clear Policy, Tepe contends that higher education today is not seeing the same level of scrutiny at the federal or state level, and that students who will have gone through K-12 schooling under Common Core standards should be evaluated during their time at a college or university.

Tepe says this will “put more accountability for outcomes in institutions of higher education.”

Overall, she seeks a more comprehensive and one-size-fits-all evaluation of K-12 education in the U.S. In addition, she decried the fact that different states can set their own bars for proficiency at any level they desire.

“With these tests, you had all these states saying, ‘Our students are proficient; our students are doing really well.’ Yet, when they took a national assessment … you were suddenly seeing that those state tests were not measuring students very well,” she said.

Since many students move to different towns and states throughout their K-12 education, she said this creates a problem when students are receiving “different messages about their proficiency,” which can become problematic when they reach college.

“Suddenly they realize they don’t have the same skills as the people they’re working with,” Tepe said, contending that many are not receiving the best information regarding their level of preparedness.

She compared this to international students taking the ACT or SAT when they seek to come to the U.S. for college, saying “institutions want to know based on their test, based on those tools, how students compare to the population that’s already there.”