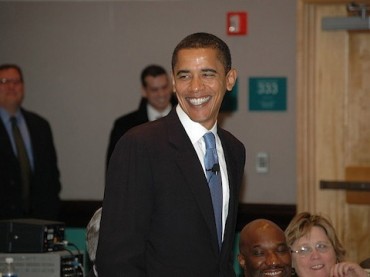 The book in question, entitled “Barack Obama,” is published by Scholastic, and is now being read by elementary school students under the Common Core program, Red Flag News reports.

The book tells the story of Obama’s historic campaign to become the nation’s first black president. So far so good. But along the way the text paints white voters in a rather unflattering light: “Some people said Americans weren’t ready for that much change. Sure Barack was a nice fellow, they said. But white voters would never vote for a black president,” the book reads.

The book then mentions Obama’s former minister Jeremiah Wright: “Obama’s former pastor called the country a failure,” it reads. “God would damn the United States for mistreating its black citizens, he said.” The text makes no mention of the fact that millions of white voters did, in fact, vote for Obama. Nor does it mention that Obama distanced himself from Wright during his campaign.

With no real context provided for these assertions, it’s reasonable to assume that many nine or ten year old kids would simply take these assertions at face value, believing, for example, that “white voters would never vote for a black president.”

The Common Core standards, which the federal government has used to consolidate control over the curriculum that local schools use, have been controversial from the start, coming under fire for poor quality and political bias.

Examples of Common Core gone amuck include a 4th grade workbook that that depicts Uncle Sam as a father figure, holding a baby “citizen.” The workbook tells students that the government “is like a nation’s family,” and is there to protect and provide for citizens. Another Common Core text coaches students in ebonics, utilizing terms such as “Po Pimp” and “mobstaz.”

The “Barack Obama” biography is the just the latest example of how Common Core curriculum is being polluted by distortions of the facts and political bias. Worst of all, these standards are being nationalized. So they will affect students all across the country.