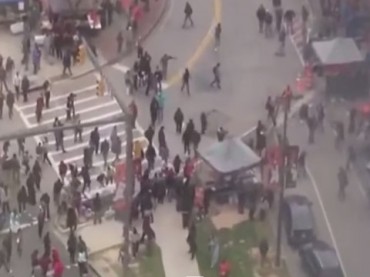 No, I don’t mean that way — I mean that they give the twenty-four hour news cycle something to pontificate about endlessly (usually from the left) … but most especially they open up opportunities for academic “experts” to jump in and opine.

Too often, quite doltishly.

The protests/riots in Baltimore this past week certainly were no exception.

Take Vanderbilt’s Tony N. Brown for starters. Professor Brown, a member of the school’s sociology department, argues that “white privilege” is to blame for Baltimore’s woes.

“White people act ‘routinely to harm, demean, and damage black and brown people’ … These actions ‘explain the lofty levels of frustration and despair among black and brown youth,’” he writes in The Tennessean, Nashville’s largest newspaper.

The professor then offers a solution to help “combat” white racism: “create a massive, grassroots surveillance network to capture video evidence” of it.

Use cell phones and GoPro camcorders to “record the discourteous way co-workers or service industry workers or police officers treat you,” Brown writes in The Tennessean.

“Record your friends talking about the indignities and micro-aggressions you as a person of color, for example, face in all- or mostly-white spaces,” the professor instructs. “If you happen to identify as white, then record Uncle Roy talking at a private family gathering about the good old days when blacks knew their place. Record how pleasant your interactions are with police officers doing routine traffic stops.”

“Then let’s all post our videos,” Brown declares concerning the vague last step in his racism surveillance scheme.

Tufts University’s Peniel Joseph, the “founder of a growing subfield that he characterizes as ‘Black Power Studies’ — which is actively rewriting post-war American and African American history” — says that “we’re missing the deeper historical roots” behind Baltimore’s protests … two generations of African-Americans have been shaped by a criminal justice system that ‘criminalizes black people en masse.’”

Augustana College’s Dr. Christopher Whitt offers up an all-too typical progressive retort — that we need “real discussions” about the “high level of frustration” many in Baltimore have due to “lacking hope” and “lacking opportunity.”

Does anyone think that these “real discussions” will include the fact that (liberal) Democrats have run the city for over two generations? That African-Americans have held significant power in the city for years?

The “white privilege” mantra rolls on with Professor Cody Pogue of Houston Community and San Jacinto Colleges. Pogue says that “White people nearly always get the benefit of the doubt, but black people rarely ever do.”

Pogue apparently is not aware that the Baltimore Police Department is about half minority, and that half of the accused officers in the Freddie Gray case are African-American. And he definitely isn’t aware that white officers “often wrongfully kill[ing]” black suspects is an outright falsehood. Lastly, Pogue, sounding like President Obama’s “You didn’t build that!” attributes his success in life to … luck: “I am a white college professor with a masters degree, but I am no better than the people rioting in the streets. I just got a little more lucky somewhere along the way.”

Young Conservatives’ David Rufful writes that Stacey Patton, a professor of American History at American University, appears to argue that “mothers shouldn’t stop their children from participating in violent protests because they are part of an effort to resist white supremacy.”

How come? Regarding the now-famous mother who, all caught on video, tracked down her son and smacked him silly, Dr. Patton says that “in this country, when black mothers fulfill stereotypes of mammies, angry and thwarting resistance to a system designed to kill their children, they get praised.”

Georgetown’s always-verbose Michael Eric Dyson included in the protesters’ “concerns” “the slow terror of expulsions from schools, the rising rates of lead poisoning, the export of jobs to places across the waters.”

Fordham’s Mark Naison said the riots were the “violence of gentrification.”

The University of the District of Columbia Law School dean, Shelley Broderick, offered to delay exams for students who would head over to Baltimore and offer free legal advice to protesters.

Broderick is quite the progressive; in her law school’s 2006 newsletter (she was editor-in-chief) a conversation about race mentioned that the subject (race) is “used to divert attention from control by the ‘fascist regime.’” (Remember who the president was in ’06.)

Her newsletter also detailed the “proud” showing of the film Quiet Revolution, the Ultra Conservative Attack on Our Constitution which examines, ironically enough, the “expanding of executive power” and the “narrowing [of] basic civil liberties.”

Well-known cable talking head and Morehouse College prof Marc Lamont Hill scoffs at the idea that there are only a few “bad apples” among the Baltimore police. He calls the department “an occupying force in the hood.”

He also refers to the violence in the city as “uprisings” against “police terrorism.”

Lastly, our ‘ol pal Brittney Cooper, who teaches Women’s and Gender Studies and Africana Studies (of course!) at Rutgers, calls the riots “acts of justifiable rage and rebellion” and that since a “founding principle of this republic is that Black people are not fully human … revolution and rebellion [only] remain the province and property of America’s white citizens.”

Cooper also refers to Baltimore’s mayor, Stephanie Rawlings-Blake, as well as Gen. Linda Singh of the Maryland National Guard and new US Attorney General Loretta Lynch as “white supremacists in Blackface.” Because, after all, they “do the state’s bidding.” Or something.

Don’t expect the inanity to stop anytime soon. Keep your eyes and ears peeled through the (possible) eventual trial. And if a trial is moved to a different venue and/or the officers are acquitted …

UPDATE: The original version of this article attributed an opinion by Young Conservative’s David Rufful to American University’s Stacey Patton. We regret the error.