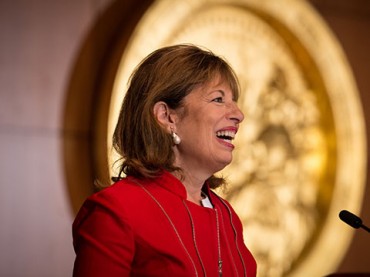 Democratic Rep. Jackie Speier of California became a viral hit this week when she inveighed against sexism in science, particularly the allegedly widespread phenomenon of colleges quietly letting faculty with sexual-harassment reputations move on to new institutions.

In a speech on the House floor, Speier referred to a University of Wyoming astronomy professor whom she implied had been passed along from the University of Arizona without any warning several years ago.

The problem, according to Inside Higher Ed, was that Timothy Slater himself told Wyoming about the Arizona investigation – and that his report was sealed to protect the confidentiality of students:

“It would have been me that brought it up,” Slater said in an interview with Inside Higher Ed after being what he described as blindsided by Speier’s remarks. Slater said he disclosed the allegations against him when he was being vetted by Wyoming in 2008 because, at the time, the 2004 Arizona investigation was known to many in his discipline. And he didn’t want there to be “any surprises” for Wyoming down the line, he said.

Slater said he didn’t have a copy of the report to which Speier was referring, since it was supposed to remain confidential to protect students. He said he wondered how Speier had obtained her copy and whether it was authentic, and that he was worried some of the details she disclosed even in her brief speech — such as that one accuser left his lab — could “out” the witnesses.

Speier also failed to note the context of Slater’s case, he said: a “broader investigation into the climate for women in the astronomy department” that found both wanted and unwanted “sexual innuendo and banter” and a poor job maintaining boundaries.

The congresswoman’s crusade resembles the politically correct Twitter mob that forced a Nobel laureate to resign from his university and harassed a NASA scientist for wearing a shirt with women on it (designed by his female friend as a birthday present).

I made a shirt for one of my close pals @mggtTaylor for his b'day. Did not expect this!! #shirtgate #shirtstorm #Rosetta #Shirt #sewing

Slater has even blogged about his case:

He said he never spoke with anyone from her office about the report, but that he’d heard in recent months some astronomers were contacting graduate students and others, trying to root out harassers in the field.

“I think there’s quite literally a witch hunt going on in the astronomy community,” Slater said. “They probably see me as a target because I haven’t really been secretive about this.”

And though Speier later released a low-quality, unsearchable redacted version of the Arizona report, the astronomy chair at Arizona “said he hadn’t and couldn’t authenticate the report because it was a private, internal document, and he was only the deputy department head at the time of the investigation.”

IMAGE: US Department of Labor/Flickr