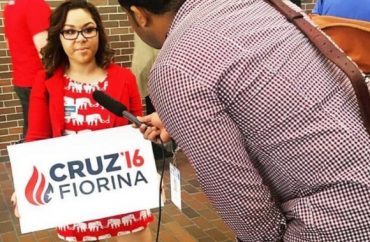 Christina Herrera, a junior at St. Mary’s College, is no stranger to political peer pressure on campus. An unabashed conservative at the Catholic all-women’s college, she got some flak as a female Republican of Hispanic descent — what many of her left-leaning peers and professors deem an oxymoron.

“Because of their skin color, lots of Hispanics believe that they should just be Democrats, because that is how they are automatically viewed,” she told The College Fix in a recent telephone interview.

“That’s how people look at you, so you kind of get conned into it. They don’t realize that some Democratic policies have hurt minorities the worst … they really don’t take the time to educate themselves about what is going on.”

But Herrera said she understands the principles she supports are what will grant her — and other Hispanic Americans — the most and best opportunities, and she’s not afraid to defend that position despite opposition she faces at her school. “Being called a ‘fake Mexican,’ a ‘disgrace,’ and being told that ‘my heart is full of hate’ through social media and in person has been astonishing,” she recently declared in an op-ed in The Observer, a campus newspaper that serves the Notre Dame and St. Mary’s communities.

Yet Herrera turned the tables on her critics.

“Trump supporters have been called racists, but the ultimate form of prejudice is when it’s expected and assumed that all women, or even all Hispanics, must have identical ballots,” she wrote in the piece, titled “I am not a victim.”

It was motivated in part by her college’s response to Donald Trump’s election as president, as well as just the overall malice she felt from others toward the Republican ticket in the months leading up to Election Day.

Herrera said her professors often “unprofessionally offered their political beliefs” and that “one of her political science professors would make fun of Trump all the time.” As a Hispanic woman, she said she felt that they looked at her funny when she expressed political beliefs that they weren’t expecting, that being conservative principles.

Then things got worse.

“After the election, people were crying everywhere, and safe spaces were offered,” she said. “The multicultural office sent out an email to all of the students of color saying ‘we are here if you need us.’ I emailed them back saying that I don’t appreciate their trying to victimize me.”

Response to her op-ed was mixed. She said she received emails from several Hispanic students thanking her and expressing their agreement with her sentiments, while noting that they were afraid to speak out themselves.

But negative responses were both more pronounced and public.

“One girl who I thought was my friend blocked me on Facebook and said that my article was rude and made fun of safe spaces,” she said. “Several others said that the piece makes them embarrassed to be a Belle [St. Mary’s mascot]. A lot of my friends took it personally, like I single-handedly put Trump in office.”

She said she was disappointed in their shortsightedness.

“This feeling of having to tiptoe around people’s feelings and this being afraid to speak your mind is harmful to any intellectual growth,” Herrera said.

“Minorities get put into this category of having to vote Democrat or they think they’re a traitor,” she continued. “I even get that from my family.”

“I love being Hispanic, but everything I have is because of God’s grace and this country,” she said. “So while I’m so proud to be Hispanic, I’m also proud to be American.”

She encouraged her peers to also stand strong in her op-ed.

“To my fellow deplorables: Remember that you too have a voice, so do not back down,” she wrote. “While it is important to listen and learn from those around you, it is also important to stand your ground. Reject the fatal concept of identity politics.”

Herrera, who was raised in the San Francisco Bay area, credits her single father and grandparents for helping to raise her into a strong, confident women who loves God and country and appreciates the value of hard work.

“My dad didn’t go to college, but worked as a truck driver to support us, and because of that we never went without,” Herrera said. “I never saw my dad go to the mailbox for a welfare check, but instead I would see him put his boots on early in the morning and go to work.”

“My dad paid to put me through Catholic school my entire life and we were always surrounded by those morals,” she added.

Herrera also noted most of her family historically voted for Democrats, despite believing in certain conservative principles that align better with Republicans. After many family discussions, she noted, her father began to turn away from his loyalty to the Democrat Party.

“Do not let the fear of being labeled a traitor, racist, sexist, homophobe or bigot diminish your ability to stand strong in your conservative beliefs,” Herrera wrote in her op-ed. “Keep showing up at the polls and let God handle the rest. As Alexander Hamilton once stated, ‘If you don’t stand for something, you’ll fall for anything.’”

MORE: Cornell student assaulted for being Republican speaks out: Attack ‘pushed me further to the right’