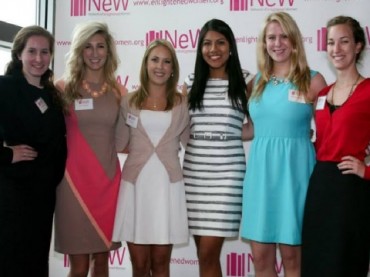 “As a young female, I am sick and tired of being defined by the pills I take.” Pavlich’s well-received talk was one highlight among many the young women who converged from across the nation to bond, brainstorm and befriend one another experienced at the gathering, a conference hosted by the Network of Enlightened Women, or NeW.

NeW connects and supports female college conservatives, and provides them with an outlet to express and promote their views, which stand against overwhelming liberal campus counterparts.

The 10-year-old organization, which began as a book club at the University of Virginia in 2004 and today consists of more than two dozen campus chapters nationwide, continues to expand as more young women join its ranks and additional proactive projects are launched.

Last month it helped with a new online Conservative University to combat radical feminist ideas touted at campuses. And next semester, its chapters plan to join forces with other like-minded groups on campuses to host events, bring in speakers, and spread their messages.

And that message is radical feminism does not represent all women.

“NeW is important because it shows the alternate voice. It gives women on campus the option to have another point of view without being judged,” Christie Abel, incoming president of the Cornell University NeW chapter, said in an email to The College Fix.

“It promotes dialogue between clubs,” she added. “By having a different voice, we contribute to the diversity of thought on campus and I think that the most crucial that we as a club can do.”

Abel said she and many of her peers are not impressed with mainstream feminist philosophies.

“I believe that many women today fall into the female ‘victim mentality’ that is so present in the media. Women feel like they need to always be on the defensive resulting in their womanhood becoming their sole identity,” Abel said.

She stressed NeW’s dedication to being tolerant of all beliefs and promoting dialogue between different clubs and people.

“We do not belittle any members for thinking a certain way or having a different idea, which we believe to be the most important thing that a women’s club can do,” Abel said.

NeW’s Cornell chapter will work in collaboration with other conservative clubs on campus to promote its principles come fall. For example, it plans to partner with the College Republicans and the Cornell Review (the campus conservative student newspaper) on projects. It also aims to host another campus speaker. Last year, it brought in former U.S. Treasurer Bay Buchanan.

“We find that we have a much better reach to students on campus when we partner up with other conservative organizations,” Abel said.

And it’s an uphill battle for such groups. Most universities are a haven for young women who adhere to the ideas of liberal feminists. Many college girls say they feel they need the movement to succeed in the workforce and society.

Buzzfeed recently featured a few of these young women, who made statements like “I need feminism so I can be a woman AND an engineer!” and “Feminismism (sic) is… not having to apologize for my success.”

But when NeW held its annual conference in mid-June, its speakers took apart such concepts.

“One of the things NeW prides itself on is encouraging intellectual diversity on campus,” said Karin Agness, founder and president of NeW. “We resonate with what a lot of women think on college campuses.”

The conference’s keynote speaker was Pavlich, bestselling author and news editor of Townhall, who spoke about the war on women from the left. Pavlich tackles the subject in greater detail in her upcoming book, Assault and Flattery: The Truth About The Left And Their War On Women.

Pavlich described a conference she attended with the National Organization for Women (NOW) to see radical feminists’ work in practice. She said she was astounded to find that the group was selling blatant communist and socialist materials at its gathering.

“The left is dependent on ignorance and to push their own goals and promote their agenda,” she said.

Pavlich also discussed how common female role models touted by the left aren’t as pro-women as they seem. For example, Hillary Clinton’s defense of a child rapist and her comments that the victim was possibly “romanticizing a sexual experience” do not exactly portray her with women’s best interests at heart.

Other women to speak at the conference included Penny Nance, CEO and president of Concerned Women for America; Sabrina Schaeffer, the executive director of the Independent Women’s Forum; and April Ponnuru, the policy director of the YG Network.

Panelists often tackled the subject of women’s roles in the workplace and family life. They emphasized that women should not feel pressured to give up their families for their careers.

More importantly, they said, women should be free to make the best choices for themselves, whether that means working full-time, staying at home with their children, or a mix of both.

Panelists also discussed the wage gap myth, debunking the 77 cents on the dollar statistic and asserting that many women’s choices affect those amounts, not necessarily sexism.

Speakers also stressed positive communication with liberals and feminists, saying conservative women need to be more proactive with outreach to other females instead of constantly operating on the defense.

At the conference, Pavlich summed up the path forward to fight liberal feminist bias in society.

“The place to push back starts on college campuses,” she said.