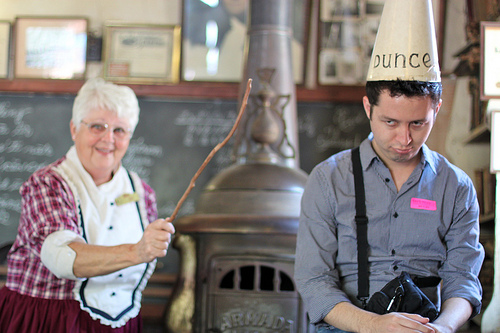 I came across this recently and just had to share it here on the Hardwire. Mike Adams, a criminology professor at the University of North Carolina Wilmington recently received a note from a student informing him that he is “the biggest embarrassment to higher education in America.” Adams’s response is, well, quite an entertaining read:

I want to take the time to thank you for writing and telling me that I should be fired from my position as a tenured professor because I am “the biggest embarrassment to higher education in America.” I also want to thank you for responding when I asked you exactly how you arrived at that conclusion. Your response, “because you insist that marriage requires one man and one woman,” was both helpful and concise.

1. In the early spring semester of 2013, a women’s studies professor and a psychology professor at Western Carolina University co-sponsored a panel on bondage and S&M. The purpose of the panel was to teach college students how to inflict pain on themselves and others for sexual pleasure. When you called me the biggest embarrassment in higher education, you must not have known about their bondage panel. Maybe you were tied up that evening and couldn’t make it.

2. At UNC Chapel Hill, there is a feminist professor who believes that women can lead happy lives without men. That’s nothing new. But what’s different is that she thinks women can form lifelong domestic partnerships with dogs and that those relationships will actually be fulfilling enough to replace marital relationships with men. I can’t make this stuff up, Ed. I don’t drop acid. Well, at least not since the late 1980s. But I promise this story is real and not an LSD flashback.

3. At Duke University, feminists hired a “sex worker” (read: prostitute) to speak as part of an event called the Sex Workers Art Show. After his speech, the male prostitute pulled down his pants, got down on his knees, and inserted a burning sparkler into his rectum. While it burned, he sang a verse of “the Star Spangled Banner.” I believe that stripping incident was almost as embarrassing as the other one involving the Duke Lacrosse team…

Wow. And that’s only points one through three.

Check out the full article here.