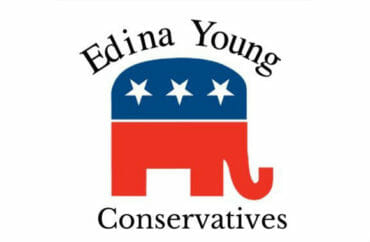 A Minnesota student conservative club that was shut down for criticizing a student protest against the American flag is strongly supporting a state bill that would require “academic balance” from school employees.

“The amount of indoctrination we have endured in school because there are no restrictions placed on teachers expressing their political views is unfathomable,” Ana Doval, vice president of the Young Conservatives Club at Edina High School (below), told The College Fix in an email.

The Senate bill will  “definitely be getting voted out” of the Education Finance Committee hearing, its last hurdle before a floor vote, sponsoring Sen. Carla Nelson told The Fix by phone Friday.

Students told her they feel immensely “pressured” in their public schools to “captively accept” or “vocally acknowledge” liberal ideologies, according to Nelson.

The Republican said liberal opponents should recognize the bill is also intended to prohibit conservatives from using schools “as a platform to push their conservative beliefs” or “religious beliefs” in classrooms.

Teachers can have their views and their free speech, but they shouldn’t be able to “use taxpayer resources” to promulgate their political ideas with “a captive audience,” Nelson told The Fix.

Never again will they ‘apologize for being conservative’

Academic-balance policies must require schools to provide “a broad range of serious opinions pertaining to the subjects of study, including contemporary policy controversies,” the text reads: “Public education courses are not for the purpose of political, ideological, religious or antireligious indoctrination.”

These policies also must “require caution from classroom teachers when expressing personal views in the classroom.” Teachers would not be allowed to introduce “controversial matters without a relationship to the subject taught, especially matters in which the classroom teacher does not have special competence or training.”

The Young Conservatives Club at Edina High School, which was reinstated in order to settle its lawsuit against the school district, hopes to never have to “apologize for being conservative” again if the bill goes through, club member Doval told The Fix.

She and her peers don’t see the bill as “controversial” in any way, or as an infringement on anyone’s First Amendment rights. Doval said parents likely expect their children to be “taught how to think, not what to think,” when they go to school. (The bill also applies to charter schools.)

Doval’s club filmed a group of student protesters who refused to stand for the national anthem at a Veterans Day assembly last year, sparking threats to club members.

The YouTube account “EHS Antifa” posted a video in response that featured a person in a Guy Fawkes mask asking the school administration to terminate the club because of its “alt-right agenda.” The person warned the YCC that the school anti-fascists “will not stop until every tentacle of your evil monstrosity is sliced off at the nerve.”

Edina High School Principal Andy Beaton responded by punishing YCC, rather than investigating who was behind EHS Antifa, leading YCC to sue the district.

The school shut down YCC’s group-messaging app, effectively terminating the club, according to the Sun Current. Beaton claimed YCC never applied for “school-sponsored” status this academic year so it couldn’t have been shut down.

Supporters of Nelson’s bill point to incidents of this nature to show the political bias by school employees and the district.

Asked to address complaints by opponents that her bill takes away free speech from teachers, Nelson told The Fix she rejects that characterization. She just wants moral consistency and both sides of any given argument looked at and discussed carefully.

While the bill hasn’t been formally scheduled for a hearing in the Finance Committee, Nelson said members recently had an “informational hearing.”

The bill has received pushback from those who believe it doesn’t just restrict teachers from freely expressing themselves, but also harms students by shutting off debate.

Denise Specht, president of teachers union Education Minnesota, dubbed the bill the “Uncritical Thinking Protection” act, according to the Post-Bulletin.

She said it essentially prevents staff members from using methods that encourage critical thinking, particularly in debate classes where students must argue views that may contradict their own.

English teacher Tim Klobuchar told the Senate E-12 Policy Committee at a bill hearing the “legislation is yet another attempt to instill fear in teachers.”

Committee member Susan Kent, a Democrat, told the hearing she was afraid the bill might spook teachers away from Minnesota.

“Why are we creating yet another reason to dissuade very talented, capable, educated people from serving our kids when we need them so badly?” she asked her colleagues.

Josh Crosson of EdAllies, a state group that advocates for “underserved students” but also questions racial integration in schools, told senators the bill could hamstring schools from stopping “bullying of LGBTQ people” or promoting “racial equity,” according to the Sun Current.

Conservative students told senators the mistreatment they face isn’t limited to the classroom.

YCC member Jazmine Edmund said students who disagree with her were “openly aggressive … We were shoved and yelled at in the halls.”

Tatum Buyse told senators she “cannot wait” to leave Edina High School because she is daily called slurs and the “environment in the school is so political and negative.”