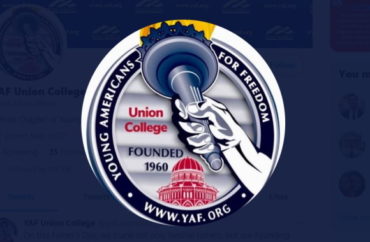 Union College in New York recently released the contact information of leaders of the campus Young Americans for Freedom chapter, a conservative club, prompting student members to be doxxed and harassed by peers and activists.

YAF at UC Chairman Samuel Levit told The College Fix his chapter has “been bombarded and slandered with hateful rhetoric, labeling, and vile mischaracterizations” after the college gave out the contact information.

The controversy began after the Young Americans for Freedom chapter posted on Instagram and other social media in the wake of George Floyd’s death a message that condemned both the police officer’s actions and the rioting and looting in response.

The post also denounced “the false and damaging narrative that our justice system and law enforcement systemically act in a manner that is biased, brutal, or unfair.”

On Instagram, some Union College students swarmed the post with negative comments. Many claimed that the views in the post “do not represent official information or the views and opinions of Union College or its student body.” Multiple other commenters expressed disgust and surprise at the “Nazis at Union.”

The outrage eventually morphed into students demanding the contact information of the chapter’s leaders. The college administration obliged, according to the Young America’s Foundation, the campus chapter’s parent organization.

“Union College administrators have caved to the leftist mob, informing leadership of the Young Americans for Freedom chapter that they will give out their private contact information after students became enraged at an Instagram post the chapter made denouncing violent rioters and looters,” YAF said June 12.

Levit told The College Fix that the college released only YAF members’ names and emails. However, he added, some of the names “were erroneously given, as the college assumed leadership positions.”

He added that the information was not originally available, and that students would not have been able to access it had the college not released it.

Levit said that he and the members of his chapter are happy and willing to engage with students who disagree through legitimate avenues and that his chapter leaders are not afraid to be identified, that they are “very proud of our work and hope to be inspirational leaders in our community.”

But he did take issue with the fact that the UC administration gave out the information “when it is clear that it is not being requested in the interest of civil dialogue, but rather a mob that wishes to slander and dox.”

“Our issue lies with the willingness to open up our emails to trolls and agitators who are looking for nothing more than to degrade others,” Levit told The College Fix. “The disgusting labels which are antithetical to our values are a cheap way to attempt to shut us down rather than engaging in much-needed dialogues.”

Union College spokesman Phil Wajda told The Fix via email that UC keeps the names and email addresses of the leadership of student organizations. According to Wajda, the college “routinely provides that information to the internal Union community only.”

According to Wajda, the college was simply following its procedures and not aiding and abetting the doxxing of students. He said the release of the names and emails of organizational leadership is a common practice.

“When a request was received seeking contact information for the college’s chapter of YAF, Student Activities provided the information as it would for any request,” he said.

As Young America’s Foundation said, when the chapter asked what policy allowed the college to do this, “they were told it’s not a policy, but a ‘practice.’”

Wajda said that “we do not censor or restrict speech that makes us uncomfortable. Rather we encourage conversations that facilitate constructive engagement allowing the opportunity for us to engage in meaningful conversations.”

The YAF chapter at Union College, however, had a less positive view of the student body’s actions.

“It is unfortunate that some do not see the value in questioning the dangerous single narrative—a liberal monologue—on campus and resort to immediate labeling and slandering rather than adding to a discussion,” Levit said.

Young America’s Foundation said that its legal team sent a letter to UC explaining that it would not tolerate “aiding in the harassment and intimidation of conservative students on campus, including releasing personal contact information.”

NEW: Angry alumni of Union College in NY are demanding the school denounce the @YAF chapter after a pro-police Instagram post, claiming their existence promotes "white supremacy" on campus. https://t.co/YfLc32Wplb

But making matters worse, Young America’s Foundation recently said that over 1,200 Union College alumni have signed a petition asking that the college “denounce” the “racist and inflammatory statements” made by YAF “and establish a more comprehensive application and review process for groups seeking student organization status and potential campus speakers.”

The list of grievances takes issue with YAF’s bringing speakers such as Ben Shapiro to campus. One signer wrote that bringing Shapiro to campus would “degrade the personhood of the people of color on Union’s campus.”