After Gettysburg College refused to disinvite a speaker whose organization monitors Islamic radicalism, the student group that invited him realized they didn’t want to rely on the good graces of administrators.

That’s when the campus chapter of Young Americans for Freedom started working on a plan to protect freedom of expression for everyone on campus, but particularly “unpopular” groups like theirs, Vice President Wellington Baumann told The College Fix in an email.

A year’s worth of work paid off recently when the private liberal arts school in Pennsylvania approved a “Freedom of Expression Philosophy” that YAF and others hope will protect individual rights on campus.

The comprehensive statement, approved by the Board of Trustees, is intended to reflect the college’s “commitment to sustain a community in which all members feel that their ideas, opinions, and beliefs are respected and protected, even when those ideas are not shared universally.”

It not only warns members of the community against disrupting others’ events, but tells them they are “expected to encourage and facilitate” the free speech of others:

No group or individual has the right to interfere with the legitimate activity of other authorized persons and groups as interference with expression compromises the College’s goal of creating an environment where issues can be openly discussed.

The Foundation for Individual Rights in Education applauded the college for taking an institutional stand for freedom of expression, even though the civil-liberties group still has qualms about other Gettysburg policies.

It was a good thing that students who support free speech were paying close attention to the administration’s work over the past year, another student activist told The Fix: Its draft statement allegedly had a big loophole.

‘Too many allowances for the administration to censor speech’

According to YAF’s Baumann, discussions about a formal statement to protect free expression started near the end of the spring semester a year ago

YAF invited Robert Spencer, director of Jihad Watch, to speak on campus, sparking outrage and debate within the college community when the club’s funding request was approved by the student government.

Though Gettysburg President Janet Morgan Riggs (below) implied that Spencer threatened the college’s “diverse and inclusive learning environment,” she refused calls to bar him from campus. Instead, she assigned an outside professor to give a speech titled “Professional Islamophobia” days before Spencer’s.

YAF played “the largest role of any campus organization” in discussions on developing “an institutional philosophy” that would prevent similar issues from arising in the future, Baumann said. Though the committee set up by President Riggs last fall conversed with other cultural and political groups, YAF was the most “consistently active,” he claimed.

At the end of the semester, the committee released its first draft. Baumann said it drew a backlash – without specifying where the backlash came from – because it “contained a clause that exempted school policies on non-discrimination.” That meant Gettysburg could suppress expression under the guise of protecting students.

The committee made changes in response to these concerns, and the Student Senate, faculty and trustees all voted and backed up the revised statement. 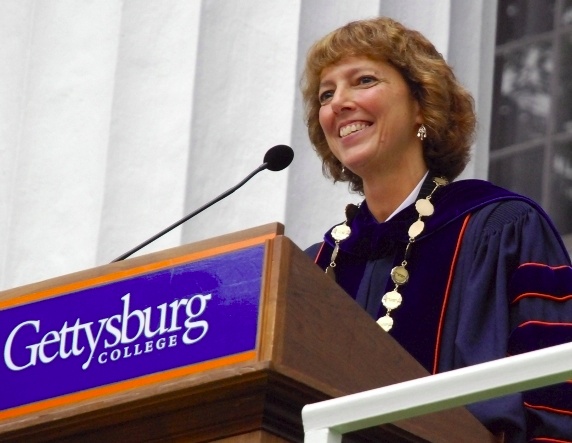 Chris Condon, president of the Young Americans for Liberty chapter at Gettysburg, confirmed Baumann’s description of the process. He told The Fix the committee of faculty, administrators and one student “consulted with various student groups in authoring the policy” before the draft went up for a vote.

“The chief concern among some was that the policy made too many allowances for the administration to censor speech, but their fears were pacified when some changes were made to the language in question,” Condon wrote in an email.

The Freedom of Expression Philosophy explicitly credits similar statements from Franklin & Marshall College and University of Chicago for inspiring “sections” of its own statement. The so-called Chicago Statement is considered the model for many others than followed.

The Foundation for Individual Rights in Education told The Fix it’s pleased to see the school’s decision to endorse the statement.

“The college clearly took a thorough and deliberative approach to its process of adopting the statement, inviting commentary and feedback from students, faculty, and administrators, before the Board of Trustees ultimately adopted a finalized statement,” Azhar Majeed, vice president of policy reform, wrote in an email.

Having sought input from many stakeholders, Gettysburg has helped students recognize the value of “free inquiry and robust debate in the educational setting” and “to think through free speech issues of the day,” he said.

Though FIRE said in a blog post that it wants to work with the college to “reform its current speech-related policies” and ensure the new statement is “reflected” in other policies, the college has already nixed such cooperation.

Gettysburg earns a “yellow light” rating from FIRE owing to several policies that are “ambiguous” and invite “administrative abuse and arbitrary application.”

Among these: The college says “bullying” includes “physical gestures” that are “unwelcome or unreasonable,” as well as “hurtful” jokes that are intended “to embarrass.” Gettysburg also encourages students to “promptly” report “bias conduct,” which can result in “severe sanctions” from the college.

“I am in full support of an expansion of Gettysburg student’s [sic] freedom of speech rights just as FIRE has described,” he told The Gettysburgian, the campus newspaper. “I look forward to working closely with FIRE in the near future as the process of removing undue restrictions on the natural rights of students continues into the future.”

But the student representative to the committee, Patrick McKenna, and Dean of Students Julie Ramsey confirmed that they don’t want FIRE’s help.

Ramsey told the paper that the committee itself would decide which policies to revise “in light of the Philosophy statement,” without regard to FIRE’s recommendations.