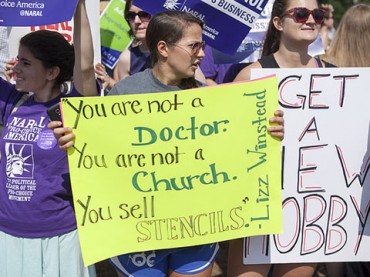 While the ruling does not guarantee a victory in the lower courts for universities challenging the mandate on religious grounds, religious freedom proponents are hopeful the courts will rule in favor of the universities.

Under the Religious Freedom Restoration Act (RFRA), the federal government can “substantially burden a person’s exercise of religion” only when there is a “compelling government interest” and it is the “least restrictive means” of achieving the government’s purpose.

Writing for the 5-4 majority, Justice Samuel Alito wrote that providing contraception can be in the government’s interest, but forcing businesses to provide it “plainly fails” the least-restrictive-means test.

Because the court ruled the federal government has other ways of providing contraception without requiring businesses to pay for them, religious universities may also qualify for that exemption.

Six of the schools represented by the Becket Fund for Religious Liberty – which also represented Hobby Lobby – have been granted injunctions against the mandate, including Union University, Colorado Christian University and Houston Baptist University.

Colorado Christian was the most recent plaintiff to prevail. A federal judge in Denver issued an injunction in late June, saying the mandate violated RFRA. Many federal courts were waiting to rule on challenges to the mandate until after the Supreme Court ruled.  For example, the College of the Ozarks and Belmont Abbey College both have pending cases in courts waiting to hear from the Supreme Court in the Hobby Lobby case.

Tony Perkins, president of the Family Research Council, said in a press release he was meeting with the other plaintiff in the case, Mennonite-owned Conestoga Wood Specialties, when the Supreme Court ruling was announced.

“While we celebrate this landmark decision, it is our hope that lower courts will follow the Supreme Court’s lead and protect non-profits like Little Sisters of the Poor, Priests for Life, and Wheaton College” from the mandate, Perkins said.

Wheaton lost its anti-mandate argument in federal appeals court in 2012 on the grounds that the government had promised not to enforce the rule until it devised a final accommodation for religious schools like the evangelical Wheaton.

A spokeswoman for the College of the Ozarks told The College Fix the ruling would help it continue its Christian mission in education.

The Council for Christian Colleges and Universities released a statement asking the government to reconsider the regulations in light of the Supreme Court’s ruling and “craft new regulations that fully respect the religious convictions of CCCU institutions.”

Jonathan Turley, a constitutional expert and law professor at Georgetown, told CNN the ruling was a “significant game-changer” and “huge blow” to the administration.

“This has been an awful 10 days,” with the high court striking down federal programs relating to the Fourth Amendment and warrantless cellphone searches, separation of powers regarding federal appointments, and now the First Amendment religion clause, Turley said. “You just don’t want to get out of bed after a week like that.

The ruling left open some ambiguities to be sorted out in later court cases, such as what “closely held” means.

Paul Horwitz, who teaches constitutional and religion law at the University of Alabama, told WVTM Birmingham that since the ruling involves the RFRA statute and not the First Amendment directly, it may not help other entities get exemptions from parts of the Affordable Care Act.

“This case gave an answer for one dispute. But that’s all it could possible [sic] do and we can expect some form of this controversy to continue,” Horwitz said.

Brittney Cooper, a professor of women’s and gender studies at Rutgers University, disagreed with the ruling. “No words, other than those of the four-letter variety, for the #scotus right now,” she wrote on Twitter.