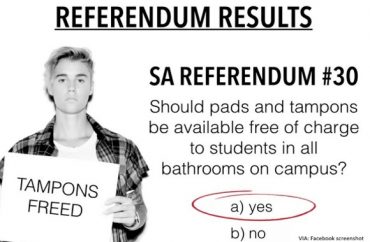 Operating under the notion that not all people who menstruate are women, students at Cornell University have overwhelmingly voted to approve a campus referendum to provide tampons in men’s bathrooms.

The referendum on the ballot stated: “Should pads and tampons be available free of charge to students in all bathrooms on campus?” As approved, it means sanitary products may soon be available for free in all campus bathrooms, a move called by some students “a basic human right, like water or shelter.”

The measure passed with nearly 80 percent of the student vote in favor, the Cornell Review reports, adding:

The reasoning behind stocking both men’s and women’s restrooms with feminine products is that not all people who menstruate are women, when accounting for the trans-gender population.

… Many of those who voted “yes” made claims along the lines of, “this is a basic human right, like water or shelter,” and that it’s “ridiculous” and “insane” that they aren’t free already. Many noted that condoms are freely available at the campus health center so tampons should be, too.

Those who voted against #FreetheTampon expressed concern over the potential financial burden the project would create and lack of planning as well as the likely waste of the products, especially in the men’s bathroom, considering that likely less than a percent of the population is trans-gender. Some students even noted that they would be in support of supplying the women’s rooms with tampons, but not the men’s.

This is not the first Ivy League institution to undertake the men’s tampon crusade. Cornell students sought to follow in Brown University footsteps, as that Rhode Island campus has also announced it will supply tampons free of charge in all campus bathrooms — including men’s, the Cornell Daily Sun reports.