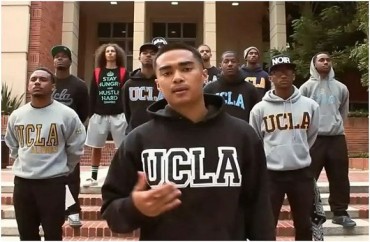 Sy Stokes, who … somehow managed to stick it out at UCLA despite the college being a “racist corporation” and a “’place of privilege, callous to the challenges’ black men face” (his words), was recently the subject of a 3000-plus word profile in the Chronicle of Higher Education.

Stokes acquired quite a bit of fame over a year ago when he, as a junior, created “The Black Bruins” video. In it, Stokes, among other things, put forth the negative comments about his college noted above. The College Fix’s  own Josh Hedtke discussed the video and Stokes’ claims in February of last year.

Now, Minding the Campus’s John Rosenberg, as he always does so well, exposes the incoherent logic pretzel into which contemporary diversity advocates — in this case, Stokes — nearly always twist themselves.

According to the Chronicle, Stokes is “the son of a black father and a Chinese mother.” Thus he could have as accurately identified himself as “Asian,” but if he had done so he might well have not been admitted to UCLA — despite the fact that it is not allowed to take race into account — and would certainly have had a much harder time getting accepted to any selective university not obligated to be colorblind.

Moreover, there is also evidence that Mr. Stokes himself is not so enamored of “diversity.” According to the Chronicle, his dance experience was simply one example, continued at UCLA, of “years of feeling unwelcome among peers who didn’t look like him, who came from different kinds of neighborhoods.” Wait. Isn’t exposing students to peers “who don’t look like” them, who come from “different kinds of neighborhoods,” the very essence of the “diversity” that educrats at UCLA and other selective institutions insist is the sine qua non of an effective education?

There is a final irony fueling Stokes’ anger, an anger usually expressed in the language of underrepresentation — “Of men at UCLA,” he told Inside Higher Ed, “black males make up 3.3 percent; of the 2,418 entering male students this year, 48 were black,” etc. He claimed it was “‘a big cop out’ for UCLA to blame its low number on the ban on consideration of race.” As for what he wants, he insisted “We are not asking for a handout. We are asking for a level playing field.”

But insofar as the goal of admitting more “underrepresented” minorities is so that colleges can “mirror the community,” demographic statistics do not support Stokes’ demand.

Indeed, as Rosenberg continues, the “general population figures” argument for diversity only ever seems to work in one direction.

Perhaps the most eye-rolling instance of the article is the “dance experience” alluded to in the second paragraph above.

Stokes claimed that is when he “first tasted racial tension” (age 14) after being invited to a homecoming dance at a different high school. “People stared at me like crazy … [w]hatever I did, I had eyes on me.”

One might indeed attribute those leers to the fact that “just about everyone was white” at the dance … had Stokes not indicated what he wore to the event: “a Yankees cap, T-shirt, and Nike basketball shoes.”

Rosenberg says, “Less star-struck observers might think the above was not so clearly racial tension.”