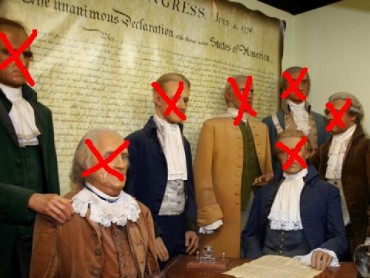 The College Board’s new framework for Advanced Placement U.S. History courses is under fire by a wide swath of respected conservative scholars, who say the revisions largely ignore the Founding Fathers and the heroics of World War II, among many other complaints.

“The ‘left’ would like to make the founders appear as bigoted, non-religious, slave holding aristocrats,” Joseph Fabrizio, a history teacher in the Philadelphia area and a former major in the U.S. Marine Corps, said in an interview with The College Fix. “The more they can get people to believe they [the founders] are flawed, the better chance of ‘selling’ the liberal agenda to young minds.”

“What better way than to have it taught to our brightest students,” he said.

The uproar has been so vocal and widespread that even the Republican National Committee last week condemned the revisions and called on Congress to delay their implementation.

The fervent complaints prompted the College Board this week to promise to “clarify” the framework to conservatives, Education Week reports. It remains to be seen whether those clarifications will nullify critics.

A College Board spokesperson told FoxNews.com this month that their leaders “continue to meet with individuals who have concerns about the redesign to listen, solicit feedback and find solutions.”

Among the proposal’s leading critics is Peter Wood, president of the National Association of Scholars, who decried the College Board’s “radical” new revisions, set to go into effect this upcoming school year.

“The College Board has turned AP U.S. History into a briefing document on progressive and leftist views of the American past,” Wood writes. “It is something that weaves together a vaguely Marxist or at least materialist reading of the key events with the whole litany of identity group grievances.”

Others describe the changes as a curriculum coup that sets dangerous precedents. Jane Robbins, a senior fellow at the American Principles Project, and Larry Krieger, a retired AP U.S. History teacher from Pennsylvania, in a jointly published article, detail some of the problematic subjects.

The duo has helped lead the charge to alert parents and sound the alarm on a national level.

“The new Framework inculcates a consistently negative view of the nation’s past,” Robbins and Krieger write, noting chapters on colonial America focus on the development of a “rigid racial hierarchy” and a “strong belief in British racial and cultural superiority.”

This, they argue, “ignores the United States’ founding principles and their influence in inspiring the spread of democracy and galvanizing the movement to abolish slavery.” In addition, teachers will be required to focus more on specific conflicts between the colonists and Native Americans, rather than discuss the “rise of religious toleration, the development of democratic institutions, and the emergence of a society that included a rich mix of ethnic groups,” they write.

Perhaps the most alarming to the conservative activists is that the new framework erases American “giants” such as Benjamin Franklin, James Madison, and other founders, they added, noting George Washington’s contributions are “reduced to a brief sentence noting his Farewell Address.”

Robbins and Krieger also say the new framework allows teachers more “flexibility” in discussing various Spanish missions in the 18th century, which they believe is the College Board’s way of suggesting these missions should get “more attention that the heroes of 1776.”

So what’s behind all of the changes?

In an interview with The College Fix, Jane Robbins suggests it’s an effort on the part of the College Board “to replace traditional history instruction with a leftist, revisionist view of U.S. history that conflicts with the vast majority of state history standards, and in fact with the AP U.S. History course that was taught for decades.”

She condemned the idea of focusing on group conflicts rather than the “dreamers who built America.”

Robbins also said that important events in America’s past, including the Founding Fathers, the stories of heroism in World War II, and the heroes of the Civil Rights movement, are simply “gone” from the new curriculum.

She said she suspects the College Board did this so that it is more in line with the idea of focusing on “groups in conflict” and “negativity” rather than on “individuals” and positive aspects.

Robbins cautions, though, that she is not suggesting the negative aspects shouldn’t be taught.

“Of course it should,” Robbins said. “But it shouldn’t be the only thing that’s taught.”

Robbins also said she spoke to a professor who wondered whether anyone would want to fight or die for America after reading the “depressing, dispiriting” framework.

Joy Pullmann, a research fellow at the Heartland Institute and managing editor of School Reform News, said the changes stem from David Coleman, known as one of the chief architects of Common Core, who is also the current president and CEO of the College Board.

In an interview with The College Fix, she said Coleman has overseen “frightful changes to the U.S. history curriculum for America’s brightest students.”

“If he really wants to repair relationships he has ruined by creating the mess that is Common Core, he will put his actions where his mouth is and act swiftly to eradicate the bias and teacher manipulation added to the Advanced Placement U.S. History curriculum under his watch,” she said. “This will demonstrate that he takes his critics seriously and follows his own advice to listen to those who worry about the degradation of U.S. education.”

The changes can be traced to the Fall of 2010, when the College Board sent a “validation study” to the history departments of almost 60 colleges and universities. But the framework itself was not posted on the AP Central website until the Fall of 2012.

This made Larry Krieger suspicious.

In an interview with The College Fix, Krieger, who is joining Jane Robbins in her efforts, suggested the College Board made “significant changes” in the framework during that two-year period.

But Trevor Packer, a vice president at the College Board, has published a critique of Robbins’ and Krieger’s conclusions about the framework.

Packer said Robbins and Krieger’s criticisms “reflect a misunderstanding” of the framework.

Instead of removing the topics and individuals that Robbins and Krieger cite, he said, AP U.S. History teachers are given more flexibility because they “know how to best address them intelligently at their own instruction.”

“Again and again, Krieger pretends that history teachers … would not know that they needed to discuss these topics in the classroom, unless they are spelled out in a textbook-like treatment directly prescribed by the College Board and addressed on College Board-administered exams,” Packer wrote.

Packer also suggests Krieger is cherry-picking some details while ignoring others.

Packer, in his published document, also fired back at Pullmann’s claim that the framework stems from Common Core due to David Coleman’s leadership, saying this is untrue because the framework was published prior to Coleman becoming president and CEO of the College Board.

Dr. Lawrence Charap, head of the History and Social Sciences Content Development, did not return several requests for comment.