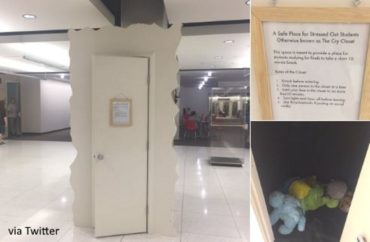 An art student at the University of Utah has built a “Cry Closet” designed to allow the campus community a private and safe space to blow off some steam during finals.

The tall wooden box, complete with stuffed animals inside, is officially titled “Safe Place for Stressed Out Students Otherwise Known as The Cry Closet,” and it went viral on Twitter after a student there tweeted images of it out and said: “so my school installed a cry closet in the library LMFAOOOOOOOOO what is higher education.”

so my school installed a cry closet in the library LMFAOOOOOOOOO what is higher education pic.twitter.com/6rGcJv9qjr

It was built by Nemo Miller, a student in the fine arts program, and will remain in the school’s library until finals week ends May 2, reports Inside Higher Ed.

The Cry Closet lists a set of rules on its door: “Knock before entering, only one person in the closet at a time, limit your time in the closet to no more than 10 minutes, turn lights and timer off before leaving, and use the hashtag #cryclosetuofu if posting on social media.”

While the closet has received plenty of ridicule, others have come to its defense.

A graduate art student (@nemosanartist) at @UUtah created “the Cry Closet” as an art installation for students during finals. It is a creative idea, and seems to acknowledge the fact that we shame those who show sadness is public while excusing anger and rage. #grief #hpm #pedpc