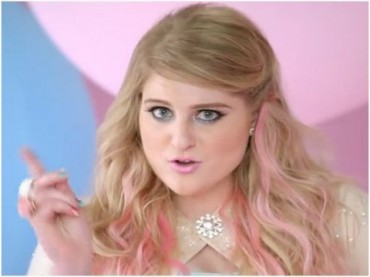 Just when you thought it couldn’t get any more unintentionally hilarious, along comes (North Carolina State’s) Technician’s Mary Anna Rice complaining about those “insensitive” Caucasians once again “appropriating” another racial group’s culture:

“All About that Bass” joins the ranks of Iggy Azalea’s “Fancy,” MAGIC!’s “Rude” and Miley Cyrus’ “We Can’t Stop” as songs involving white performers adopting black culture as their own. Whether it be the use of an artificial African-American vernacular, the unabashed commandeering of reggae music elements or the utilization of black dancers as props to, shall we say, prop the lead singer up, we have it all!

But we’re discussing “All About that Bass” specifically. In addition to using a dialect that is decidedly not natural to her, [Meghan] Trainor surrounds herself with people of color from the beginning of the music video. Her primary back-up dancers, two black women, are shown flanking her in multiple shots throughout the video, lending her support and approval. Read: credibility.

The black women in the video have no purpose outside of encouraging Trainor, a white woman. In this way, they are effectively rendered props to be used by her as she pleases. This is not OK.

Mid-song, Trainor states she’s “bringing booty back.” Under the current connotation of the word “booty,” it is not Trainor’s to bring back. The term evokes a stereotypical image of a sexualized black woman, and has, in the past, been used to misrepresent black women as sex objects who don’t have the ability to say no.

Are folks like Ms. Rice too “sensitive?” Should they “get over it?”

“Um, no” she writes. “We no longer live in a civilization where this should be considered even remotely acceptable” (emphasis mine). And how dare white singers “appropriate” what black singers and rapper do. After all, “it is not theirs to do with what they want,” Rice says. Word is Eminem’s next album is titled Who, Me Appropriate?