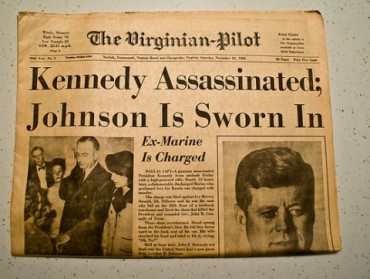 The co-author of the new book “Dallas 1963” says Tea Party members of today are just like the radical political protestors who hated President John F. Kennedy decades ago, that there’s parallels between modern Tea Party rhetoric and the heated political climate that contributed to JFK’s assassination.

“It’s defining your political opponent as an enemy of the state, and this is the same instinct that flared up in Nazi Germany when the Nazis took over,” co-author Steven L. Davis said in an interview with The College Fix.

Davis, a curator at Texas State University, details in his book the extremism of John F. Kennedy’s opponents in Dallas in the years preceding his assassination, and takes aim at some of President Barack Obama’s conservative detractors today, comparing them to the Third Reich.

“Their opponents got elected to power through a democracy, but they began describing their opponents as enemies of the state, which sure enough they became, (and then were) executed,” Davis said.

Rhetorical anger in politics “opens the door, I think, for people who are unstable to feel like maybe they’re being called to take action,” he said. It “helps inspire them to take action and that’s one of the reasons I think that kind of rhetoric is incredibly dangerous for our country,” he said.

Davis cited an incident in Dallas shortly before the 1960 presidential election where then senator and vice presidential nominee Lyndon B. Johnson and his wife, Lady Bird, were physically assaulted by a mob of protestors in what came to be known as the Mink Coat Riot because of the wealthy status of the attackers.

“What we’re talking about is mob violence and mob violence isn’t always physical violence directed at a target at a specific point of time,” he said. “It’s whipping up mob anger against a target and it could be rhetorical anger.”

Both Kennedy and Obama, Davis argued, came to the presidency during very difficult times in American history. This, Davis proposed, is the reason for why “civic hysteria” caused an “irrational hatred” for Kennedy and is now causing it for Obama.

Davis explained Kennedy became president during the Cold War and the specter of nuclear annihilation, civil rights and integration; and Obama during “the most difficult time since the Great Depression.”

“(Kennedy) was seen as very threatening to people and basically the status quo, as is Obama,” Davis said. “And so people who oppose that are the ones leading those attacks.”

Davis recalled a visit to Dallas that Obama made at the start of the Tea Party movement where he was met with protestors just as Kennedy had during his presidency. According to Davis, Obama was greeted by these protestors with signs that read “traitor to America,” “Obama wanted for treason,” “Obama un-American” and “impeach Obama.”

These signs, Davis said, were the same kind Kennedy faced in his visit to Dallas.

“And every single person in that audience was white, which should tell you a little something,” Davis said about the protest against Obama.

Davis said protesters during President George W. Bush’s tenure that depicted him as Hitler were a much smaller part of his opposition than those similarly criticizing Obama now.

“What you have right now with Obama, same thing you had with JFK, is you have people who consider themselves super-patriots,” Davis said. “That’s really the distinction.”