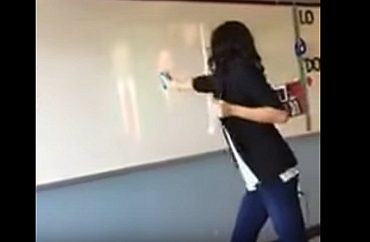 In yet another case of “What the hell was (she) thinking??” a Dallas high school art teacher is in hot water for firing a water pistol at a projection of Donald Trump during last Friday’s inauguration.

The teacher yells “DIE!!” while repeatedly firing the gun.

The incident appears to take place in a classroom, but it’s unclear whether students were present.

According to Townhall.com, the teacher originally had posted the video on Instagram with the captions “Watching the #inauguration in my classroom like…. #no #stop #denial #squirtgun #hypocrisy #powerless #saveusall #teachthembetter #atleastitsfriday”.” It’s since been deleted but saved versions of it are available YouTube and Twitter.

EAGNews.org reports that some on Twitter tracked down the Instagram account and ID’d the owner as teacher as Payal Modi of W.H. Adamson High School in Dallas.

The video shows Trump projected on a classroom whiteboard in front of the teacher, who lunged at the image with a blue squirt gun while firing off several rounds as she screamed “die!” She continued to squirt Trump for several seconds while emitting an odd whimpering noise.

Voices in the background of the video during the last couple of seconds sound like students, though the video does not show anyone but the teacher. …

Predictably, nearly all of those who commented about Modi on the Rate My Teacher site called for her termination over the Trump assassination stunt.

“Insane person, unfit to be a teacher,” one student wrote. “I think she should be fired immediately!”

“Terrible example for our children!” a parent posted.

“Disgrace to education and should not be pushing her own views onto students in such a flagrant manner,” another parent wrote. “Should be fired and barred from ever being a teacher again.”

Those sounding off on social media were equally as brutal.

A copy of the video posted to Twitter by Trump supporter Deplorable Vet has been retweeted more than 9,000 times since Wednesday.

Keep in mind this occurred in Texas which Trump won by almost ten percent. Perhaps no one would have batted an eye if it took place in, say, Vermont (where Clinton won by almost 30%).

Gateway Pundit reports that the Secret Service in Irving, TX is aware of the matter.

MORE: How to use video games to ‘beat up’ President Trump