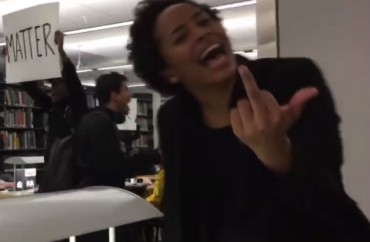 Dartmouth’s Assistant Director of Alumni Relations, Meg Ramsden, has been busy communicating to the school’s alumni to inform that the Black Lives Matter activists who, back in November, charged into a campus library chanting and yelling racial epithets won’t be subject to any punishment for their actions.

“After concluding its investigation with respect to the complaints and studying what was seen in the video in Baker-Berry Library, it was determined there were no specific violations of the Standards of Conduct,” Ramsden writes.

“In essence, no rules for which there are recorded and communicated sanctions were broken.”

Ms. Ramsden does go on to say that, despite there being no Standards infringements, “the spirit of the recent Moving Dartmouth Forward Citizenship Pledge was clearly violated.”

“Abusive language aimed at any of our community members by any group, at any time, in any place,” she continues, “is not acceptable.”

So, first-year law students, just what principle are we to derive from Ms. Ramsden’s tortured logic: that any group can invade the library and verbally insult students who otherwise were calmly and quietly studying there?

Does such aggressive behavior not violate Standard VIII of the Dartmouth Community Standards of Conduct, which includes a prohibition on:

…conduct (including by way of example, obstruction, noise, or the display of banners or objects) that prevents or disrupts the effective carrying out of a College function or approved activity, such as classes, lectures, meetings, interviews, ceremonies, and public events.

And how about NH TITLE LXII CRIMINAL CODE CHAPTER 644 BREACHES OF THE PEACE AND RELATED OFFENSES Section 644:2?:

644:2 Disorderly Conduct. – A person is guilty of disorderly conduct if:(c) Disrupting any lawful assembly or meeting of persons without lawful authority…

Article author Joseph Asch then provides the definition of “disorderly conduct” in the state of New Hampshire (where the school is located), which makes Ms. Ramsden’s letter appear even sillier.

Asch adds: “If the College Republicans are still in a playful mood, they might go nuts in Baker [Library] night after night and see how the administration reacts. Will Meg [Ramsden] and the lawyers who wrote her letter still believe that high-volume, in-your-face behavior falls under the principle that ‘In an academic institution, however, freedom of speech is mission critical.’”