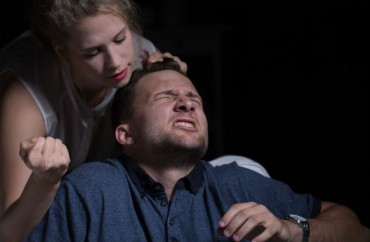 Dartmouth expelled a male student after he accused a female student of sexually assaulting him and threatening to accuse him of rape if he didn’t keep having sex with her, according to a lawsuit against the college filed earlier this month.

“John Doe” alleges the Ivy League school violated Title IX by assigning an administrator to his case who “held the belief that men are inherently violent” and that accusing women “are to be believed, even if a jury has found their story to lack credibility.”

Though “Sally Smith” had initiated an evening of “sadomasochistic” sex with an incapacitated Doe that left him bruised, bleeding and in “extreme pain” in his genitalia, Smith was the one to file the first complaint, according to the suit.

Doe alleges his expulsion was completely contrary to numerous pieces of evidence, which actually pointed to Smith as the aggressor.

Dartmouth committed negligence and breach of contract and “fair dealing” in the investigation, he said, asking a federal judge in New Hampshire to force the school to expunge his record, reinstate him and award him damages.

The allegations mirror those in an earlier lawsuit against nearby Amherst College, which expelled a male student who claimed his sober accuser had violated him while he was “blacked out.”

A federal judge allowed that lawsuit to move forward after questioning the “credibility” of his accuser and citing potential “ulterior motives” for her accusation. Months later, the college settled.

‘Veiled threat’ if he didn’t keep having sex with her

Flipping the script on other lawsuits that describe a female student accusing a male of one or two incidents of nonconsensual sex in an otherwise consensual relationship, Doe claims his first sex with Smith was consensual and the following liaison was not.

After their first encounter in July 2016, Smith asked Doe to try “S&M” with her and even slapped him in the face, according to the lawsuit.

She showed up unannounced at his fraternity party the next month, where Doe drank so much that his last memory of the night was throwing up: “He does not have any memory of seeing Smith that night.” The suit says he drank about 36 ounces of “predominantly hard alcohol.”

The next morning Doe woke up to Smith in his bed, who informed him they had sex again and things got “rough.” Because he had been incapacitated the night before, Doe could not consent to Smith’s advances, he claims.

Doe noticed his injuries after Smith left. Soon after, the S&M enthusiast sent him photos of her own bruises and said the night had been “fun.”

In a meeting that afternoon, Smith told Doe how they got their injuries, confirmed he had asked her to leave “multiple times during the evening,” and issued what he considered a “veiled threat”:

Smith made comments to him about a friend of hers who had been falsely accused of sexual assault, and said she would never do such a thing to Plaintiff. She stated that if Plaintiff had sex with her that afternoon it would be helpful to his “case.”

After two months of trying to avoid Smith, Doe learned she had filed a “physical assault” claim against him with Dartmouth’s Title IX office.

‘Fully consensual’ … while he was ‘really blacked’

Doe’s lawsuit alleges Dartmouth used the wrong set of procedures both to investigate Smith’s assault claim and then to sentence him.

Because Smith told administrators and investigators several times that she believed their sex was consensual, the “relevant disciplinary system” was not the college’s sexual-assault framework but the “Dartmouth College Committee on Standards.”

Doe formally accused Smith of sexual and physical assault a month later, and the prosecutor hired by the school, Nancy Sheahan, added his accusations to her larger investigation of the evening of Aug. 4-5.

Smith’s texts indicated several times that Doe was severely intoxicated, calling him “really blacked” and “really out,” yet she portrayed Doe as “enjoying [the] rough playing around.” She told a friend the encounter was “both fully consensual.”

She also told Sheahan she knew Doe was “really out” the night of their disputed liaison, admitted to performing oral sex on him and said she was “on top of” him the whole time. Smith even told an investigator she “instigated a wrestling match” with him.

Though Doe disputed the prosecutor’s final report, saying she “failed to credit” much evidence and ignored “numerous discrepancies in Smith’s testimony,” Dartmouth found Doe responsible for “putting another student at risk of physical harm.” It cleared Smith of both the “physical harm” and sexual-assault allegations.

MORE: Amherst settles due process suit with ‘blacked out’ male it called a rapist

The college again notified Doe that it would use the sexual-assault procedures when convening a sanctioning panel, though the director of judicial affairs, Katharine Strong, told Doe he was “correct” when he complained it was the wrong set of procedures.

But Strong went on to invent a procedure that’s not mentioned under either disciplinary framework, Doe claims: creating a “1.5-page summary” of prosecutor Sheahan’s 500-plus-page report, and giving that summary to the sanctioning panel as its sole evidence.

That summary left out evidence crucial to Doe’s case, including Smith’s repeated statements that she enjoyed and initiated much of the evening’s activities and “repeatedly visited” Doe’s house afterward.

It also left out Doe and Smith’s private resolution of their dueling allegations, as well as their mutual request to Dartmouth to end its investigation and not punish Doe, according to the suit.

“Unlike virtually every other disciplinary case heard at Dartmouth, Strong indicated that John’s was to be decided without him having any opportunity to appear before or write to the person or people deciding his sanction,” Doe claims.

Consent confusion is the same as murdering your girlfriend

Doe’s appeal was handled in May 2017 by Dean of the College Rebecca Biron, who should have been barred from such proceedings because of her previous writing, the suit claims.

It was rife with gender stereotypes about men, saying it was “easy for them to act boldly and brutally when faced with closed doors.”

It's as if Dartmouth wanted to invite a TIX claim. The dean's full article is here:https://t.co/zamtZEJICp

Biron compared a Dartmouth student whom a jury had acquitted of rape to the South African athlete Oscar Pistorius, who was convicted of murdering his girlfriend:

It is knowable that neither one of these events would have happened if Pistorius and [the student] had questioned their own interpretation of the situation before blasting their way through it.

Biron’s expressed views were “highly inappropriate for an adjudicator of a case involving allegations of sexual misconduct and physical violence between a man and a woman,” the suit says.

Those views suggest why Biron upheld Doe’s punishment of “immediate separation” despite all the contrary evidence, according to the suit.

The lawsuit requests that Dartmouth “reverse its finding that plaintiff violated its policies,” “expunge his record,” “reinstate [Doe] as a student in good standing,” and award him damages.

It says Doe lost his internship following his expulsion, “and there is an extremely remote chance that he will be able to complete his undergraduate degree at any school in the United States of a similar quality to Dartmouth.”

One of Doe’s lawyers, Naomi Shatz, declined to make him available for an interview.

Shatz previously told The College Fix why she was challenging a Massachusetts proposal to impose “trauma-informed” techniques in campus rape investigations. That bill (S-2203) has not seen action in the House after passing the Senate last fall.