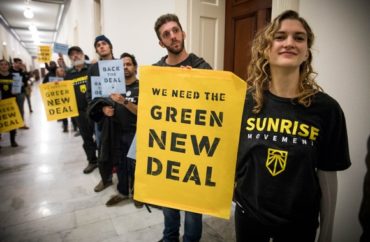 Professors ‘begrudgingly’ comply with her requests to address students: report

Dartmouth College has allowed a paid left-wing activist to proselytize in classrooms for months in spite of the fact that she’s violating its anti-solicitation policies, according to a campus publication.

She was spotted campaigning and handing out literature in a campus building even after a Dartmouth administrator confirmed she could only do that in public spaces on campus, according to Berghuis.

Dartmouth media relations has not responded to College Fix emails and voicemails in the past 10 days asking what it has done to handle outside activists coming into classrooms to campaign.

Berghuis said that professors often comply “begrudgingly” with Katie’s requests to make a presentation. Neither Elizabeth Smith, the faculty dean, nor her executive assistant Leslie Tait has answered Fix queries about what leeway professors have to let activists into their classrooms for purposes unrelated to the class.

While Berghuis’s article didn’t reveal Katie’s full name out of “courtesy,” he identifies her as a recent Bowdoin College graduate who says she works for the Sunrise Movement on LinkedIn. That would make her Katie Morse-Gagné.

Neither NHYM nor Sunrise New Hampshire responded to Fix queries about their campus activism in general and Katie’s role specifically.

Berghuis later contacted The Fix to clarify his portrayal of Dartmouth’s knowledge of the activist’s campaigning on campus. He also added details about the timeline he had laid out vaguely in the article.

$75,000 a year to hear ‘political campaigning in the classroom’

Berghuis wrote in the Jan. 22 article that Katie has been a regular fixture on campus, sporting a Green New Deal t-shirt and advocating for NHYM, which also advocates for free college and Medicare for All.

She hands out flyers telling students that they have the power to elect candidates that “support our values.”

“Then, she asked us to fill out cards, on which we were to indicate political matters important to us from a list of options, as well as provide our contact information,” he continued.

The cards only listed issues important to “the increasingly leftwards-shifting Democratic Party,” said Berghuis, suggesting NYHM is simply using the cards for recruitment, not to gather student opinion. The cards also bear the Sunrise logo (below).

She showed up in Berghuis’s government class “a few weeks later” and gave “the same presentation,” he said. The newspaper learned in mid-January that she had also promoted Medicare for All in a computer science lecture in the Life Sciences Center, sharing “her ordeals with the health care system.”

“Political campaigning in the classroom, especially at a school that costs $75,000 a year, is inappropriate,” he wrote:

Given that Katie’s activism is clearly partisan, non-College affiliated, does not pertain to course curriculum, takes up expensive learning time, and that she is not a Dartmouth student, The Review contacted the school administration to clarify Dartmouth’s policies pertaining to third party non-College affiliated activism.

After a “promptly scheduled” meeting, Associate Dean of Student Life Eric Ramsey “emphatically affirmed that any form of solicitation is strictly prohibited on private Dartmouth College property” and will not be tolerated, said Berghuis. (Dartmouth College prohibits campaigning outside of public spaces such as outdoor areas.)

While Ramsey promised he would reach out to NHYM and Katie to tell them where they aren’t allowed to campaign on campus, classroom activism did not stop with the associate dean’s word, Berghuis wrote. Three days after Review staff met with the administration, “Katie was still campaigning and distributing literature outside a classroom,” he said, attributing another Review staffer.

When confronted, she reportedly justified her right to be there because “she is not selling anything,” though solicitation does not require sales.

Dartmouth media relations did not answer Fix queries to confirm it had stopped “Katie” and other paid activists from entering classrooms and buildings, and how it enforces no-solicitation rules. The Fix also asked how Katie had been allegedly entering classrooms for months without any pushback from administrators.

NHYM did not respond to queries about how widely its activists make presentations in classrooms at Dartmouth and other schools, what resistance they may have faced, and for an interview with Katie herself. Sunrise New Hampshire didn’t answer whether Katie’s activism at Dartmouth is part of her paid work for the organization.

‘The administration was nothing but kind, attentive and responsive’

Berghuis wrote on Twitter after this article was published that he disagreed with the portrayal of his Review report and decision to name “Katie,” a paid activist he accused of repeatedly violating campus solicitation rules and identified in all but name. (Morse-Gagné’s LinkedIn page remains public as of Feb. 12.)

Asked to provide a specific timeline of his allegations, Berghuis wrote in an email he had a “productive meeting” with Dean Ramsey Jan. 13. He still believes the administration did not know about Katie’s months of campaigning in classrooms with the permission of professors:

[M]ost students or professors don’t go out of their way to contact the administration, like I did, to file a report. Some teachers also overtly refused Katie into their classroom, but again, regardless, people are unlikely to take time out of their busy schedules to voice complaints with the administration on matters that they deem non-urgent.

The activist was spotted again Jan. 16 outside a classroom and asked to leave by another Review staffer, he said. The day after the Review report came out, Ramsey confirmed to Berghuis “that a notice has been forwarded out to Sunrise/NHYM”:

At this point, Sunrise/NHYM has stopped campaigning in the classroom or in college buildings. In fact, the last report I received on their presence was on Thursday January 16. The issue is no longer a problem, and The Review deems the article successful. The administration was nothing but kind, attentive and responsive on the matter, once they were aware of it.

His editors have yet to respond to The Fix because “we feel the story has concluded”:

[T]here is nothing to be gained from beating the drum once again, since the administration cordially complied with our requests. Again, we seek to have a positive relationship with faculty and the school administration, and while we will be critical when necessary, this was not an instance to express outrage over.

If the administration had failed to respond to my request, or their actions had failed, I would have written another article. However, this was not the case; since everything was resolved, I moved on to my next story.

As of Feb. 12, neither the administration nor Katie’s handlers at NYHM or Sunrise New Hampshire has responded to The Fix.

UPDATE: Kevin Berghuis tweeted critically about The Fix report and reached out to elaborate on his intentions with the article. The Fix asked him to provide a more specific timeline than the one he provided in the Review article and explain why his editors never responded to requests to flesh out his article. His response has been added.