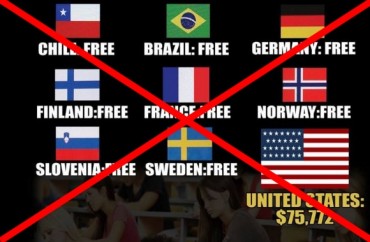 Analysts: There’s no such thing as a free education

One reason Bernie Sanders has soared with millennial voters is he constantly touts his plan to eliminate college tuition.

Underscoring that, memes that suggest free college is possible (Europeans do it!) are distributed far and wide among young people.

One image advocates the U.S. “catch up with the rest of the world” – But scholars, in interviews with The College Fix, say there’s fundamental flaws in the meme, that it is factually vacant and totally misleading.

“First, college in these countries is not free. Nothing, in fact, is free,” Reim said in an email to The College Fix. “The tax burden in countries such as Germany and Finland is extremely high. You simply cannot call something free if you are asking someone else to pay for it.”

Reim said that although increased tax rates permit certain countries to offer a wider range of social services, many Americans acknowledge the impact of high taxes on the economy and furthermore, the accompanying unemployment rates for college students who took advantage of the “free tuition.”

Additionally, Reim pointed out including France and Chile in the meme is inaccurate.

In France, the government significantly subsidizes tuition, but students do independently pay for part of their education. While Chile has announced free college tuition will be introduced, it is currently ambiguous where the funding will originate.

U.S. enrollment during this five-year window rests at 94 percent, in comparison to Germany and France, who have enrollment rates of 62 percent and 58 percent.

“France and Germany are notorious for their extensive and highly selective testing systems,” Ryan McMaken, editor of the Mises Daily and The Austrian, said in an email to The College Fix. “In other words, far fewer people are allowed to attend higher education institutions in these systems, than is the case in the U.S.”

In fact, many Americans are well educated, more so than many around the world.

Currently, the U.S. ranks ninth on the Organization for Economic Cooperation and Development’s 2013 scale for most-educated workforce, with approximately 45 percent of citizens earning a degree or certificate of some type. This is above the average of 41 percent.

Additionally, South Korea, Japan and Canada – the three leading countries for a most-educated workforce – do not offer free college tuition. In contrast, countries listed in the meme including Brazil, Finland, Germany and Slovenia all have lower rates of college-educated individuals than the U.S., and all fall below the OECD average.

Underscoring all that, McMaken also said a significant portion of money in the U.S. is spent on the so-called college experience, rather than simply obtaining a college degree. That’s on them.

“If what one wants is an education to augment one’s earning potential, it is nonsensical to spend tens of thousands, or even hundreds of thousands to attend some small expensive liberal arts college in a picturesque mid-western town,” McMaken said. “What many students are really spending their money on is a college ‘experience’ that is completely unnecessary in terms of obtaining a sufficient education.”

“Naming eight countries, two of which do not actually offer free tuition, and claiming that the United States needs to ‘catch up with the rest of the world’ would hold more weight if there were only nine countries in the world,” Reim said. “Free college is by no means a global norm.”