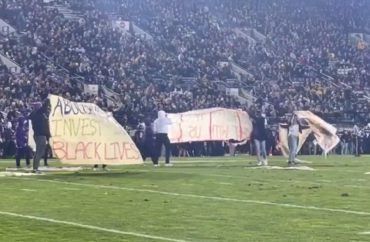 University has not said if it will punish the students

Student activists supporting police defunding took the field on Saturday during the Northwestern University football game against the University of Iowa.

“Nine protesters rushed the field at the end of the first half of Northwestern’s 17-12 loss to No. 19 Iowa on Saturday night,” Sports Illustrated reported.

After several minutes of game delay, an individual dressed in Iowa gear also rushed the field and ran through the signs, bringing some to the ground. The individual used an obscene hand gesture while exiting the field and then stood behind the endzone with his arms raised, encouraging a fan response.

because everything has to relate to Palestine. 🙄

“University spokesperson Jon Yates said no arrests were made. The matter is under investigation by University Police, he added,” the campus paper reported on November 6.

The College Fix emailed Yates and spokesperson Jeri Ward on Monday and asked if the university planned to investigate the students under the conduct code and if it would refer the matter for criminal prosecution. They have yet to respond.

The Fix emailed Julie Payne-Kirchmeier, the vice president for student affairs, and asked the same questions but did not receive a response.

The Fix also did not hear back on the same questions from Bruce Lewis, the chief of NUPD, or Eric Chin, the deputy chief of police. The Fix asked what steps the department has taken so far to interview the students.